In my continuing quest to shine the light on successful cases of defense conversion (i.e. transitioning former military facilities to non‐​military uses), I traveled to the Big Apple on Wednesday to visit Governors Island, a former U.S. Army and later Coast Guard facility that the federal government sold back to the City of New York in 2003.

The occasion of my visit was a rendezvous with Samer Bagaeen and Celia Clark, co‐​editors of a new book, Sustainable Regeneration of Former Military Sites. I contributed a chapter on two sites in Philadelphia, and co‐​authored a second chapter (with Clark) on the Brooklyn Navy Yard. Celia had previously visited Governors Island, and included it as one of many cases where former defense facilities had been converted to venues for art exhibitions.

Governors Island is accessible via ferry from Battery Park, at Slip No. 7, just adjacent to the Staten Island Ferry terminal. The ferries to the island run once every hour during the summer, with a second ferry route coming from Brooklyn on weekends. The trip takes only a few minutes, but along the way you are treated to some terrific view of Lower Manhattan and the Brooklyn Bridge.

There were perhaps one hundred on the boat that I boarded at 2 pm, but one of the friendly deck hands Krishendat (“Call me Kris,” he said) explained that the boats, which can accommodate 1,250 passengers, were packed on weekends.

I was skeptical. There were few others there as I strolled the peaceful grounds on a pleasant weekday. The National Park Service supervises the 22 acres of the Governors Island National Monument, and park rangers and volunteers showed people around and answered questions. A few folks tooled around on two‐​person bikes, and the lucky ones had golf carts for shuttling between the historic properties, including Fort Jay and Castle Williams (a former prison). For the most part, the walkways were sparsely populated or empty. The view of Lower Manhattan through the talls trees was striking. 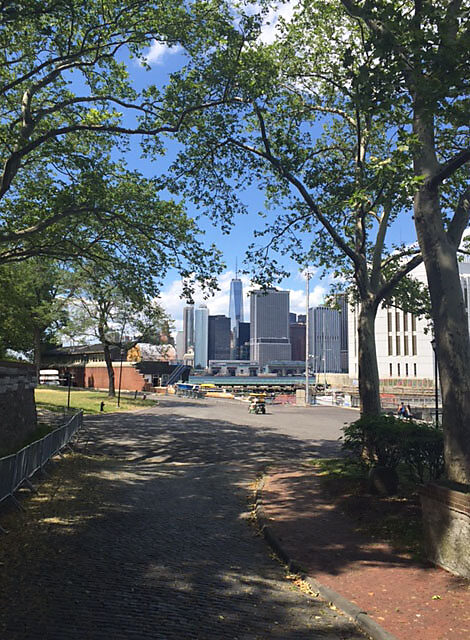 The Commanding Officer’s House, constructed in the 1840s, is a nice venue for meetings. A plaque in the entry way boasted of one such meeting: Ronald Reagan’s luncheon with Mikhail Gorbachev and then‐​Vice President/​President‐​elect George H.W. Bush on December 7, 1988. Other structures were not as well maintained, and the worst of the lot were closed off with gates and warning signs.

Leslie Koch, the long‐​time president and chief executive of the Trust for Governors Island, confirmed that 10,000 or more come to the island each day on summer weekends. Many will come for the grand opening of a new park, The Hills, constructed from the remnants of the old seawall. Leslie, who is stepping down next month, gave us a sneak peak.

The 10‐​acre area, once completely flat, now features several undulating hills of grass, small trees, and rock walkways (scrambleways) for climbing. The Statue of Liberty rose up from behind the hills as the golf cart wound its way up the freshly paved road. The new park is sure to be a big hit for all ages, but the young ones will like the slides. 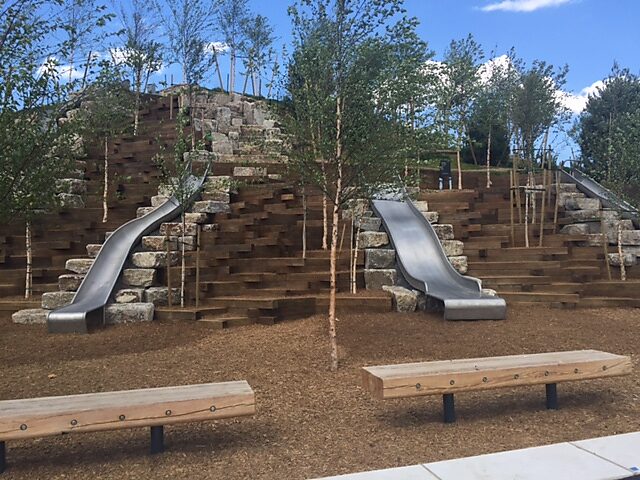 We had sped past a number of brick buildings on the way there. Most of the structures are unoccupied. Per the terms of the sale from the federal government to the City of New York, residential housing is forbidden on Governors Island. This could be a lucrative source of revenue to offset more than $16 million per year in operating expenses; by way of comparison, the Presidio Trust in San Francisco collects more than 50 percent of its revenue from residential rents. Residences can also draw businesses to former base properties, one of the reasons why the former Philadelphia Navy Yard decided to develop a few thousand apartment units. The restaurants and shops that cater to these residents also make the place more attractive to businesses, whose employees otherwise would have to travel off site for lunch or to run errands. 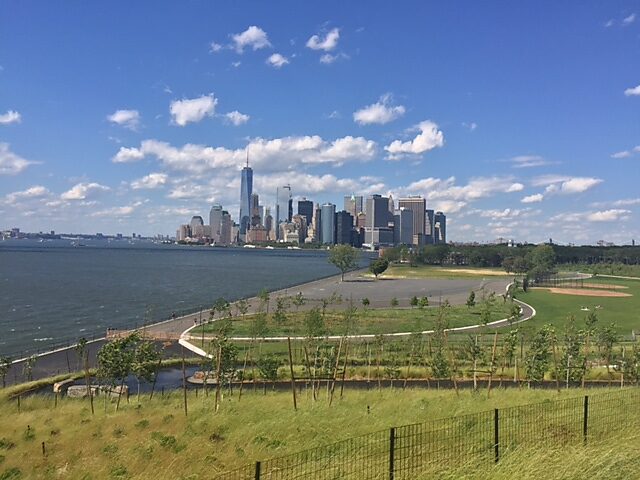 But while there are untapped opportunities on the island, it is a terrific space just a few minutes away from the heart of New York’s financial district. If you haven’t been, you should. And, when you go, remember: this former defense site was once closed off to nearly everyone. Now it is open for all to use and enjoy. We can and should do the same with other defense facilities around the country.