A View from Ankara

Ankara, Turkey — We arrived in Ankara this evening after some sightseeing on the Aegean coast, from the resort town of Kusadasi we traveled to the ancient city of Ephesus. These are the most impressive ruins from the Roman period that I’ve ever seen (excepting Rome).


The amphitheater (pictured below) seats over 24,000 people and is appropriately famous for its sheer size, but the city as a whole was impressive, boasting an estimated population of 250,000 people at its peak circa the 1st or 2nd century AD. 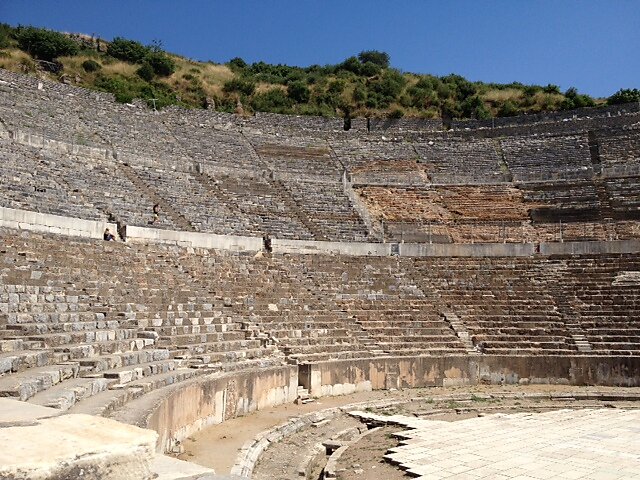 We took a one‐​hour flight from Izmir to Ankara, the capital. As in Izmir and Istanbul, I was struck by the sense of confidence and growth. Modern buildings are under construction everywhere, and there is an ebullient mood. We passed a large festival with carnival style rides. Cars speed along the main road through the center of town. It is an impressive place. But it will be interesting to see if this upbeat attitude can be maintained in the midst of widespread strikes.


When I first arrived in Turkey, a traveling companion helped me to understand its complexity. The society is characterized by multiple social and cultural divides and disparate identities. Some of the more obvious that I alluded to yesterday include the divide between secular and religious people, and between the military and civilian officials. There is also, of course, the divide between Muslims and non‐​Muslims. Among Muslims there are those who are very observant and conservative, and others less so. Most are Sunni, but there is also an Alawite community in Turkey, especially near the Syrian border. There are ethnic divisions, most prominently (and sometimes tragically) between the Turks and Kurds, but there are regional divides as well, for example, between the more laid back communities in the coastal cities, and the bustling cosmopolitanism characteristic in the mega‐​city Istanbul, or here in Ankara. Lastly, there is a traditional political divide between left and right, and various gradations along that continuum.


Consider, then, that someone can be a leftist, a Kurd, and a moderate Sunni Muslim. One can be a relatively conservative, practicing Muslim, and a supporter of the center‐​right AKP, but also respect a strict separation between church and state, and thus oppose regulations that would impose their beliefs on others. Other more religiously conservative Turks might want tougher laws restricting the use of tobacco or the consumption of alcohol, and be enthused about Prime Minister Recep Tayyip Erdogan’s efforts in this regard. One can be a moderate leftist, a supporter of the main opposition party, the CHP, but also a practicing Muslim.