A Victory for the Laffer Curve, a Defeat for England’s Economy

A new study from the Adam Smith Institute in the United Kingdom provides overwhelming evidence that class-warfare tax policy is grossly misguided and self-destructive. The authors examine the likely impact of the 10-percentage point increase in the top income tax rate, which was imposed as an election-year stunt by former prime minister Gordon Brown and then kept in place by his feckless successor, David Cameron.

They find that boosting the top tax rate to 50 percent will slow economic performance. And because of both macroeconomic and microeconomic responses, tax revenues over the next 10 years are likely to drop by the equivalent of more than $550 billion. Here's a key paragraph from the executive summary of the new study.

The country is suffering from a 50%-­plus marginal tax rate which even its architect admits was imposed without economic purpose. Now our analysis shows that the policy is set for failure: at best leading to flat growth for a decade and £350bn of lost revenue. The Chancellor should seize the occasion of the 2011 budget to reverse this disaster promptly, for the benefit of public revenues, economic growth, the government’s standing with domestic wealth-creators, and the UK’s reputation with world business.

The authors urge Prime Minister Cameron to reverse this disastrous policy, but the odds of that happening are very slight. I hope I'm wrong, but I have repeatedly noted that Cameron almost always makes the wrong choice when deciding between liberty and statism. 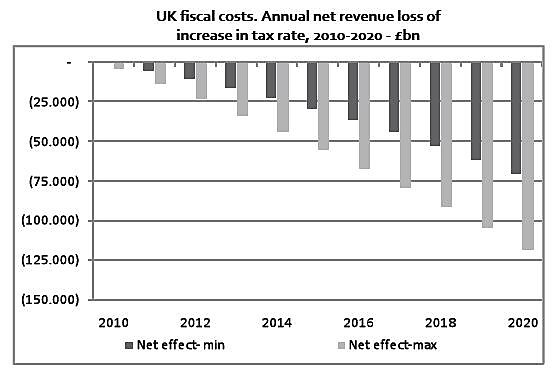 President Obama wants to impose similar policies in the United States and there is every reason to expect similarly poor results. I've already posted evidence from IRS data showing that the rich paid much more tax following the Reagan tax cuts, so it shouldn't shock anybody when the reverse happens if Obama is successful in moving America back toward a 1970s-style tax system.

To emphasize these critical points, let's close with two videos. This first video explains the Laffer Curve and why politicians are foolish if they assume that there is a fixed linear relationship between tax rates and tax revenue.

This second video debunks the notion of class-warfare tax policy.