Spending at the U.S. Department of Agriculture will be an estimated inflation‐​adjusted 43 percent higher this year compared to just a decade ago. The following chart shows the dramatic rise in USDA spending from fiscal 1970 to the president’s projection for fiscal 2011: 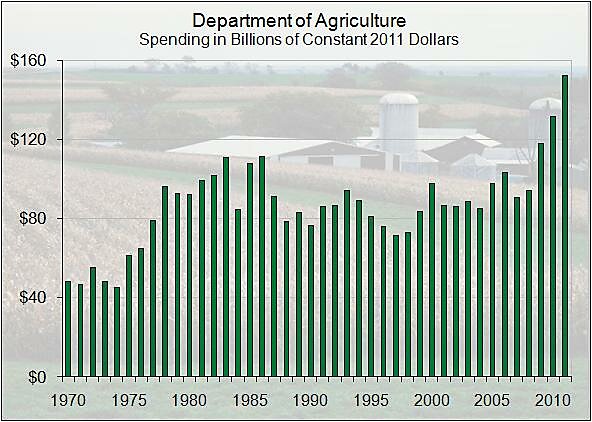 Most folks probably think of farm subsidies when they think of the USDA. However, farm programs only account for 19 percent of total USDA outlays. The vast majority of USDA spending, 69 percent, goes to food subsidies: food stamps, school breakfast and lunch programs, and the Special Supplemental Nutrition Program for Women, Infants, and Children (WIC). In fact, spending on food stamps alone this year will account for roughly half of total USDA spending.


Why aren’t these programs housed at the Department of Health and Human Services, the government’s chief welfare bureaucracy? The answer is politics, of course. Every five years or so Congress passes a new “farm bill,” which updates or sets the agenda for USDA programs and policies. Stuffing welfare programs in with traditional farm subsidies engenders broad legislative support for the total legislative package. Including food subsidies helps secure votes from urban and suburban legislators who would otherwise have little or no incentive to vote for farm subsidies.


See here for more on downsizing the Department of Agriculture, including both farm and food subsidies.