Last month, the British government announced plans to spend two percent of GDP on defense through 2020, meeting the NATO mandated level. This comes after months of nudging from the Obama administration that feared “if Britain doesn’t spend 2 percent on defense, then no one in Europe will.” The reasoning is bizarre given that few nations were meeting this spending threshold to begin with. As I wrote in June:

In 2014, only Greece, Estonia, the U.S. and the U.K. spent as much as 2 percent of GDP on defense. Excepting NATO member Iceland, which is exempted from the spending mandates, the 23 other NATO members failed to spend even two cents of every dollar to defend themselves from foreign threats. And Greece only met the 2 percent threshold because their economy is falling faster than their military spending.

Perhaps things are shifting a bit among the NATO nations. Fear of Russia has prompted some members to announce increases to their defense spending. Germany, which currently spends only 1.2 percent of its GDP on defense, pledged to increase its defense budget by 6.4 percent over the next five years. Latvia and Lithuania will also increase their defense spending, reaching two percent of GDP by 2018 and 2020, respectively.

It’s comforting to hear some Europeans talking about taking their security more seriously, but whether they will follow through remains to be seen. Either way, they will remain heavily subsidized by the United States for some time. Cato’s latest infographic demonstrates just how far ahead the United States is in all measures of defense spending, and also documents how American security guarantees allow European governments to devote a far larger share of their spending to dubious domestic priorities. Put simply, U.S. taxpayers are subsidizing Europe’s bloated welfare states. 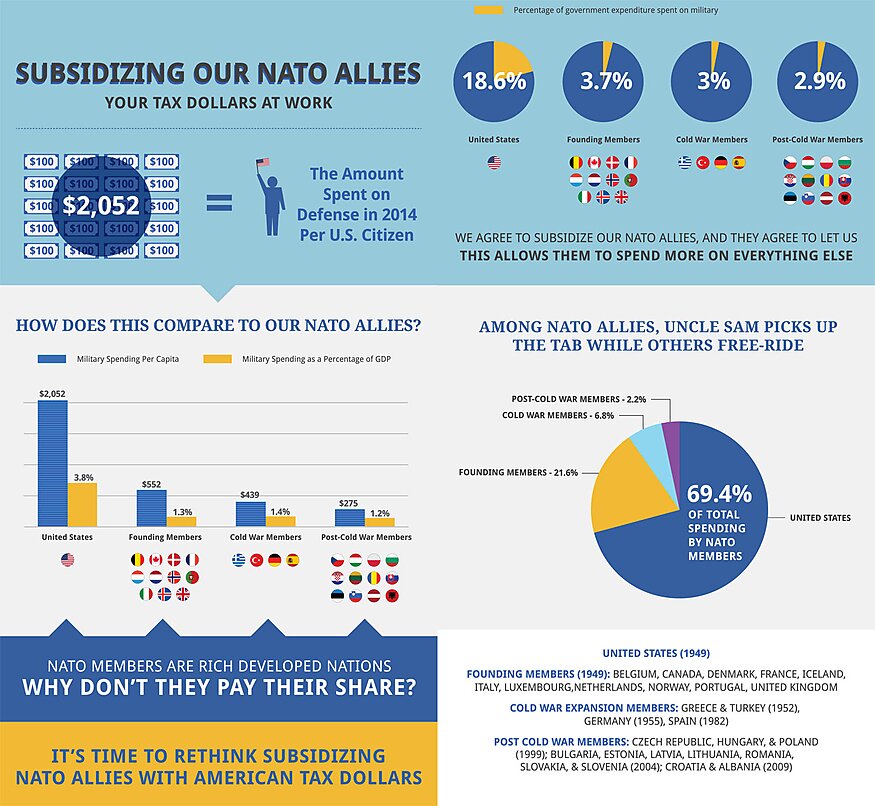 According to the most recent NATO figures*, the United States spent an estimated $654 billion or 3.8 percent of its GDP, on defense (based on the NATO definition) in 2014. That amounts to $2,052 spent by every man, woman, and child in America, nearly 4 times more than the average in NATO founding states, and 7 times more than was spent in those member states that have joined NATO since the end of the Cold War. As a share of the sum total of NATO member states’ defense spending, U.S. taxpayers contributed nearly 69 percent, even though the United States accounts for only 46 percent of total economic output by NATO members. And the free-riding problem has only been getting worse. Total military spending by NATO’s European members was less in real terms in 2014 than in 1997 – and there are 12 more member states in NATO today.

In fairness, one can hardly blame the Europeans for failing to spend more on defense. And one shouldn’t expect that they will willingly change course, despite faint signs that some European members are finally getting serious about their security. After all, people are disinclined to pay for something that someone else is willing to provide for free.

The free ride could come to an end if Washington signaled that it wanted it to. Alas, U.S. officials have been sending the opposite message. The modest spending restraint imposed on the Pentagon’s budget by the bipartisan Budget Control Act of 2011 has forced the military services to make some difficult choices, but the Pentagon’s civilian masters have so far refused to prioritize roles and missions. They could start by having an adult conversation with NATO members, and declare emphatically that our allies have primary responsibility for defending themselves and their interests. And, in order to back up words with actions, Washington should stop deploying the U.S. military in ways that discourage these other countries from doing more. It is unreasonable to expect U.S. taxpayers to shoulder these burdens indefinitely.