In “A tide that lifts all yachts,” Washington Post columnist Harold Meyerson writes, “Occupy Wall Street is not known for the precision of its economic analysis, but new research on income distribution in the United States shows that the group’s sloganeering provides a stunningly accurate picture of the economy. In 2010, according to a study published this month by University of California economist Emmanuel Saez, 93 percent of income growth went to the wealthiest 1 percent of American households, while everyone else divvied up the 7 percent that was left over. Put another way: The most fundamental characteristic of the U.S. economy today is the divide between the 1 percent and the 99 percent.”


In reality, the sample of tax returns that Piketty and Saez use to estimate pretax top incomes tells us nothing about the incomes of the bottom 90–99 percent. A footnote to Figure A1B in the Piketty and Saez study says, “Our income definition is … before individual income taxes and employee payroll taxes, and income excludes all government social transfers such as Social Security retirement and disability benefits, government health care insurance (Medicare and Medicaid), unemployment insurance, welfare assistance programs, the earned income tax credit, etc. The importance of taxes and transfers has grown over time …” Their figures also exclude all tax‐​free employee compensation (notably, employer‐​paid health insurance), and all investment income and capital gains accruing inside tax‐​favored savings accounts for college and retirement. The result, as Brooking Institution economist Gary Burtless points out, is that the Piketty and Saez measure excluded 37 percent of personal income in 2008 [and 38 percent in 2010] − up from 24 percent in 1970. 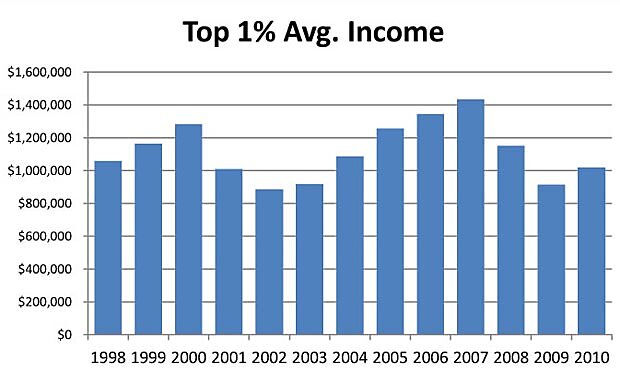 
Alan Krueger, chairman of President Obama’s Council of Economic Advisers, once provided “Another Look at Whether a Rising Tide Lifts All Boats.” The answer, of course, is an emphatic yes. Whenever the top 1 percent income share has gone down, poverty and unemployment rates went up, and vice‐​versa. That makes top 1 percent shares a paradoxical if not ridiculous measure of “inequality.”