As part of my "Question of the Week" series, I said that Australia probably would be the best option if the United States suffered some sort of Greek-style fiscal meltdown that led to a societal collapse.*

One reason I'm so bullish on Australia is that the nation has a privatized Social Security system called "Superannuation," with workers setting aside 9 percent of their income in personal retirement accounts (rising to 12 percent by 2020).

Established almost 30 years ago, and made virtually universal about 20 years ago, this system is far superior to the actuarially bankrupt Social Security system in the United States. 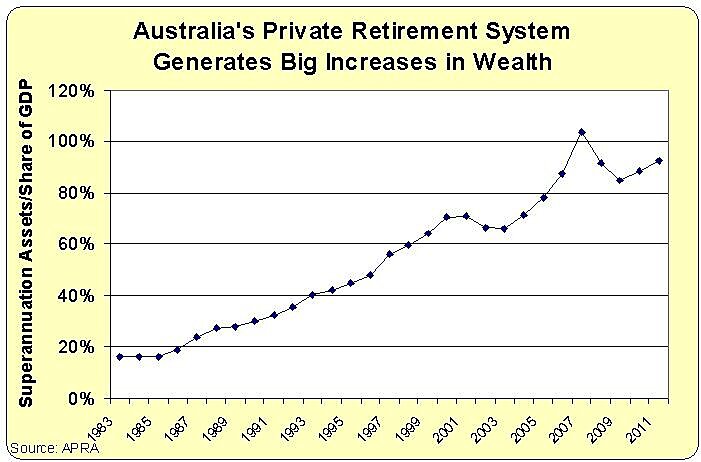 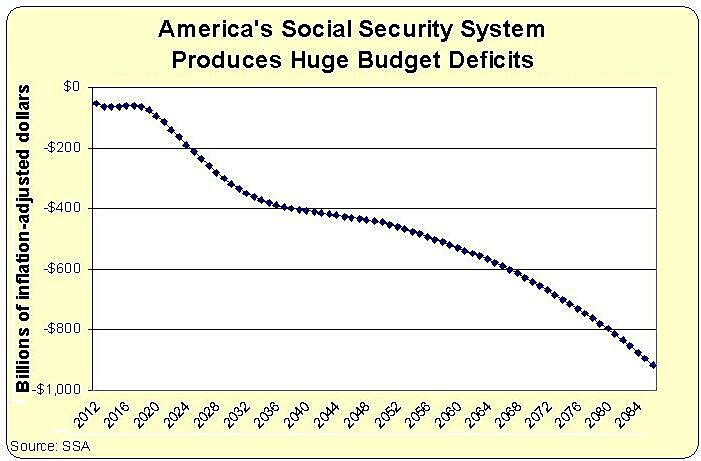 To be blunt, the Aussies are kicking our butts. Their system gets stronger every day and our system generates more red ink every day.

And their system is earning praise from unexpected places. The Center for Retirement Research at Boston College, led by a former Clinton Administration official, is not a bastion of laissez-faire thinking. So it's noteworthy when it publishes a study praising Superannuation.

Australia’s retirement income system is regarded by some as among the best in the world. It has achieved high individual saving rates and broad coverage at reasonably low cost to the government.

Since I wrote my dissertation on Australia's system, I can say with confidence that the author is not exaggerating. It's a very good role model, for reasons I've previously discussed.

The program requires employers to contribute 9 percent of earnings, rising to 12 percent by 2020, to a tax-advantaged retirement plan for each employee age 18 to 70 who earns more than a specified minimum amount. ...Over 90 percent of employed Australians have savings in a Superannuation account, and the total assets in these accounts now exceed Australia’s Gross Domestic Product. ...Australia has been extremely effective in achieving key goals of any retirement income system. ...Its Superannuation Guarantee program has generated high and rising levels of saving by essentially the entire active workforce.

The study does include some criticisms, some of which are warranted. The system can be gamed by those who want to take advantage of the safety net retirement system maintained by the government.

Australia’s means-tested Age Pension creates incentives to reduce one’s “means” in order to collect a higher means-tested benefit. This can be done by spending down one’s savings and/or investing these savings in assets excluded from the Age Pension means test. What makes this situation especially problematic is that workers can currently access their Superannuation savings at age 55, ten years before becoming eligible for Age Pension benefits at 65. This ability creates an incentive to retire early, live on these savings until eligible for an Age Pension, and collect a higher benefit, sometimes referred to as “double dipping.”

Though I admit dealing with this issue may require a bit of paternalism. Should individuals be forced to turn their retirement accounts into an income stream (called annuitization) once they reach retirement age?

I'm torn on this issue. Paternalists sometimes do have good ideas, but shouldn't people have the freedom to make their own decisions, even if they make mistakes? But does the answer to that question change when mistakes mean that those people will be taking money from taxpayers?

Fortunately, I don't need to be wishy-washy on the other criticism in the study.

Australia’s system does have shortcomings. It is heavily dependent on defined contribution plans and is vulnerable to weaknesses in such programs.

I strongly disagree. A "defined contribution" account is something to applaud, not a shortcoming.

The author presumably is worried that a "DC" account leaves a worker vulnerable to the ups and downs of the market, whereas a "defined benefit" account promises a specific payment and removes that uncertainty. Sounds great, but the problem with "DB" accounts is that they almost inevitably seem to promise more than they can deliver. And that seems to be the case whether they're supposedly based on real savings (like company retirement plans or pension funds for state and local bureaucrats) or based on pay-as-you-go taxation (like Social Security).

*Since I'm somewhat optimistic that America can be saved, I'm not recommending you head Down Under just yet.

P.P.S. There's much to admire about Australia, but its government is plenty capable of boneheaded policy. Heck, the government even provides workers' compensation payments to people who get injured while having sex after work hours, simply because they were on a business-related trip. Talk about double dipping!

P.P.P.S. Here's my video explaining why we should implement personal retirement accounts in the United States.

P.P.P.S. The death tax has been abolished in Australia, so there's more to admire than just personal retirement accounts.