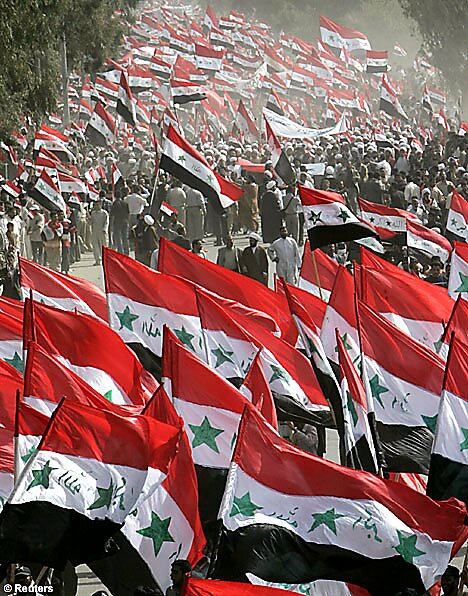 Today's New York Times has a piece on the running discussion in Iraq about the prospect of U.S. military withdrawal from their country. As the article highlights, the discussion itself "reflects a nation still struggling with issues of sectarian identity, national pride, and how to secure its future."

One of the few things former President Bush said about Iraq that I agreed with was his claim on Al Arabiya in 2005 that "the future of Iraq depends on Iraqi nationalism and the Iraq character—the character of Iraq and Iraqi people emerging."

In general, I am not very fond of nationalism, but if you want to hold together a country of 25 million people, especially when they have been riven by decades of sectarian strife, a living-memory civil war, a variety of identity politics divides, and disputes over the rents from natural resources, you could probably use some. (Maybe we could find a way that a very diverse coalition of Iraqis could chase us out.)

As the article indicates, there are a range of views about the prospect of American withdrawal. One Iraqi remarks hopefully that "I prefer that the U.S. forces leave Iraq because then extremists wouldn't have an excuse to carry guns." A follower of Muqtada al-Sadr remarks that "Whatever [Sadr] says, we will do. We will keep on resisting until the last days of our lives." An intellectual remarks that if American military forces leave, "the sectarian conflict between Iran and the rest of the Arab countries will seep into Iraq because the Iranians will try and make the Shiites more powerful and the Arab countries will support the Sunnis. This will lead to a sectarian war."

Several of the Iraqis interviewed were profoundly cynical about American intentions, believing that the United States would try to stick around for various selfish reasons. At a time when political leaders like Sen. Lindsey Graham, Rep. John Boehner, and others are suggesting that we need to find a way to stay in their country, can you really blame the Iraqis for feeling a bit cynical?

Regardless, the future of Iraq will ultimately turn on whether Iraqis decide that there is such a thing as Iraq, and if so, whether they should identify strongly with it and be loyal to it. The fact that the jury is still out on those questions more than eight years after we changed the regime speaks volumes about the folly of the war in the first place.