“Looking at the last election, was the message of that election really, ‘We need to help investors?’ I mean, the Dow is over 20,000. Are they really the group that needs the help?. . .“The overview here is that all the wealth, basically, in the last 10 years, has stuck to the top end. That’s one of the reasons we’ve had all the political turmoil, as you know. And so, kind of a hard sell to say ‘Yeah, we’re gonna repeal Obamacare, but we’re gonna send more money to the people who’ve already gotten the richest over the last 10 years.’ I mean, that’s what this does, no? I’m not a leftist, it’s just—that’s true.”

Mr. Carlson used the word “wealth” rather than income. He said, “all the wealth . . .  in the last 10 years, has stuck to the top end.”  He surely meant income, however, since the latest wealth estimate from the Survey of Consumer Finance was in 2013, and wealth of the top 1%, like income of the top 1%, clearly fell from 2007 to 2013. Despite “shared prosperity” Clinton campaign chatter, there were no gains to share. John Weicher at the Hudson Institute notes that, “Between 2007 and 2013, the poor became poorer, but so did the rich and the people in between.”

Tucker Carlson is not a leftist and neither is Peggy Noonan. Yet to define what is “true” about income growth over 10 years, they are relying wholeheartedly on the socialist team of French economists Thomas Piketty and Emmanuel Saez.

When media celebrities disparage the “top end” they do not mean Fox News anchors (who earn millions); they mean the “Top 1%” who earned more than $442,900 in 2015 according to Piketty and Saez.  When claiming all the gains over the last 10 years have “stuck to” the top 1%, Carlson appears to have accepted the same source Hillary Clinton abused when she claimed “more than 90 percent of [income] gains have gone to the top 1 percent.”

In the latest version of this ruse, Saez says, “Top 1% families . . . capture[d] 52% of total real income growth per family from 2009-2015.”  Of the many deceptions the Piketty-Saez team has inflicted on us over the years, this one may well be the most politically popular and most economically ridiculous. It has fooled many fools. 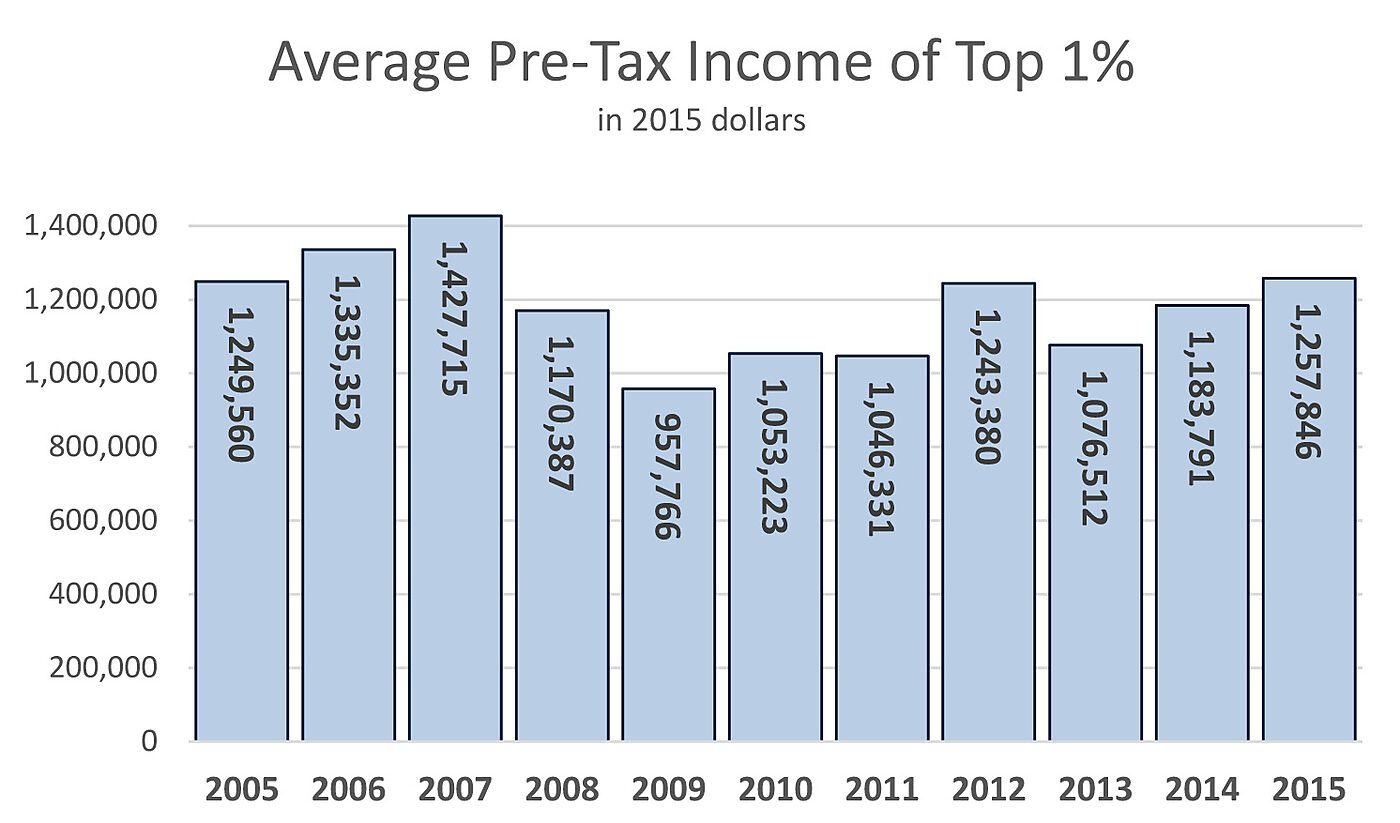 The graph shows what actually happened to average pretax incomes of the Top 1%, as estimated by Piketty and Saez.

Top incomes fell much more after taxes because top tax rates were increased from 35% to 39.6% in 2013, the arbitrary and discriminatory 1990 PEP/Pease limits on exemptions and deductions were restored, and an extra 3.8% Obamacare surtax was inflicted on those supposedly privileged stockholders.

When conservative media commentators rely on deceptive leftist statistics to make their points, they might as well be leftists.