Donald Trump is currently in the midst of trying to, as he said last night, "soften" his image on immigration, stating that he will renege on his promises to deport each and every person in the country illegally. To the extent that he is moderating—and it’s unclear how much of a change this really is—it will be because no group of voters outside of his core supporters agreed with him. More importantly, despite over a year of campaigning on the issue, he simply has not convinced anyone—even among Republicans—to flip to his side.

Pew Research Center has polled Republicans and Republican-leaning voters on their position on immigration four times in the last two years—twice before Trump announced his candidacy in June 2015 and twice after. As you can see, Trump’s no legalization view has remained flat, losing considerable ground between March and September before rebounding slightly again this year. But at no point was it the majority view in the party.

Figure 1: Pew Polls of Republicans: "Immigrants living in the country who meet certain requirements should be--or not be--allowed to stay in the U.S. legally." 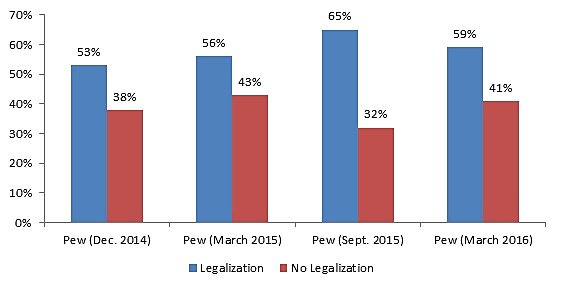 In fact, the average of the two pre-Trump polls and those after reveals a 7.5 percentage point bump for legalization and a 4 percentage point drop for the opposition after Trump entered the race. Trump may have actually driven some in his own party away from his position.

CNN exit polls of GOP primary voters in the 20 states where they asked a question about deportation also demonstrate no upward trend for Trump’s position as the campaign progressed, even as it became apparent that Trump would be the nominee. Among all Republicans who voted in these primaries, an average of 53 percent favored legalization to 42 percent who favored Trump’s deportation. 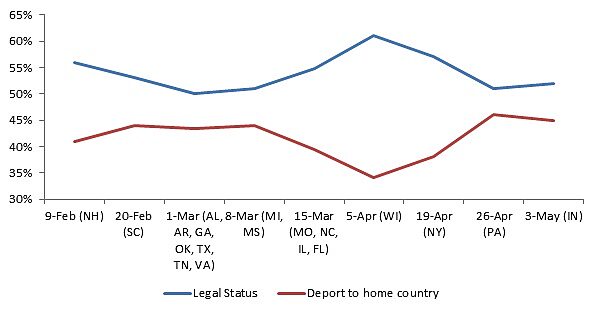 What makes this most surprising is that Trump is not an ineffective messenger for his other major policy issue—opposing free trade. Throughout his campaign, Trump has repeatedly mentioned that he would end NAFTA, reject TPP, and impose new tariffs, and he has turned the party from two-to-one in favor of free trade agreements, according to Pew polls, to two-to-one opposed, even while his immigration views have had zero impact.

Figure 3: Pew Polls of Republicans on Opposition to Free Trade Agreements and Legalization of Undocumented Immigrants 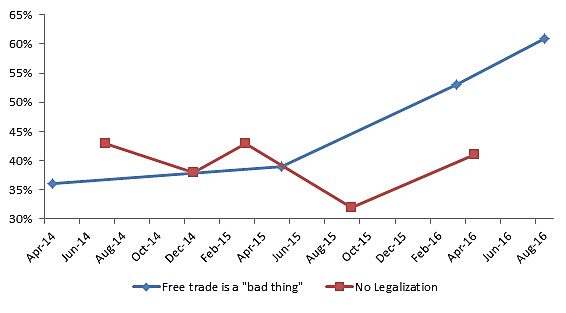 It’s not readily apparent why Republicans were so easily swayed on trade, but not immigration. My hypothesis is that while free trade was not a major issue until this election, immigration reform has been debated for well over a decade, and voters had heard all of Trump's arguments before and already made up their minds. Either way, with these numbers in mind, it’s no surprise that Trump would want to reconsider his rhetoric on immigration, while maintaining his anti-trade message (though the fact that independents support free trade should concern him).

To be clear, Trump has not (yet?) adopted the “legalization” position favored by a majority of his party. He has stated that he will continue to deport as many people as Congress gives him money to deport, citing President Obama’s use of deportation as a model, and said he will not grant them authorization to stay in the country illegally. But with public opinion strongly against that position, Trump may want to reconsider his position further.