Severe hurricanes, or tropical cyclones as they are known by those living outside the United States, are the most intense storms on the planet. Given the amount of damage they can inflict, it’s no wonder that they often are the poster children for the global warming movement—think Hurricanes Andrew, Katrina, and Sandy. Whenever and wherever they occur, you can count on some climate lobbyist telling us that storm was caused, or made worse, by global warming. Indeed, it is a green legend that carbon-induced global warming will cause more frequent or more severe tropical cyclones in the future, resulting in escalating economic damages.

Is that really so? A new scientific study addresses this topic, by Dr. S. Niggol Seo of the prestigious University of Sydney. He examined trends in tropical cyclones affecting Australia and published his results in the academic journal Environmental and Resource Economics.

Writing as background for his work, Seo states that alarming predictions of more intense hurricanes because of climate change “are of great concern,” yet he says there have been “few TC [tropical cyclone] studies in the Southern Hemisphere,” adding that there has been “no economic assessment of damages in the past.” Based on detailed reports of TCs that were generated in the Southern Ocean and hit Australia since 1970, from the Australian Bureau of Meteorology, Seo constructed damage estimates “using the reported financial loss, destruction of houses and capital goods, and losses of agricultural crops and livestock after a careful examination of the detailed individual cyclone reports,” which also included “local area income and population density where the storm hit.”

Seo’s examination of tropical cyclone data back to 1970 is important, because over that time (1970–2006) the carbon dioxide (CO2) concentration of the atmosphere rose by 55 parts per million (ppm), or more than half of global CO2 increase experienced since the dawn of the Industrial Revolution. In addition, global temperatures over this 36-year period rose by approximately 0.5°C,  to levels that some (controversially) consider unprecedented in the last two millenia. If there is a period of time in which one should be able to find a CO2/temperature-induced signal in the tropical cyclone record, the years examined by Seo would seem to be it.

Despite this alignment of the stars, so to speak, Seo’s work fails to support claims that global warming is causing or will cause more frequent and severe tropical cyclones.

As illustrated in the figure below, perhaps the greatest failure comes from the Australian researcher’s discovery that “TC frequency has significantly declined over time.” Or perhaps it is the equally damning finding that “there is no significant trend over the intensity of the TCs during that time.” Beyond those realities, with respect to the financial damages, Seo reports that the “average damage per TC has significantly fallen over time since 1970 from 38 million AUD [Australian dollars] per TC in the 1970s, to 11 million AUD in the 1980s and the 1990s, and to 1 million AUD in the first half of the 2000s.”

Annual frequency of tropical cyclones, or hurricanes, making landfall in Australia over the period 1970-2006.  Adapted from Seo, 2014. 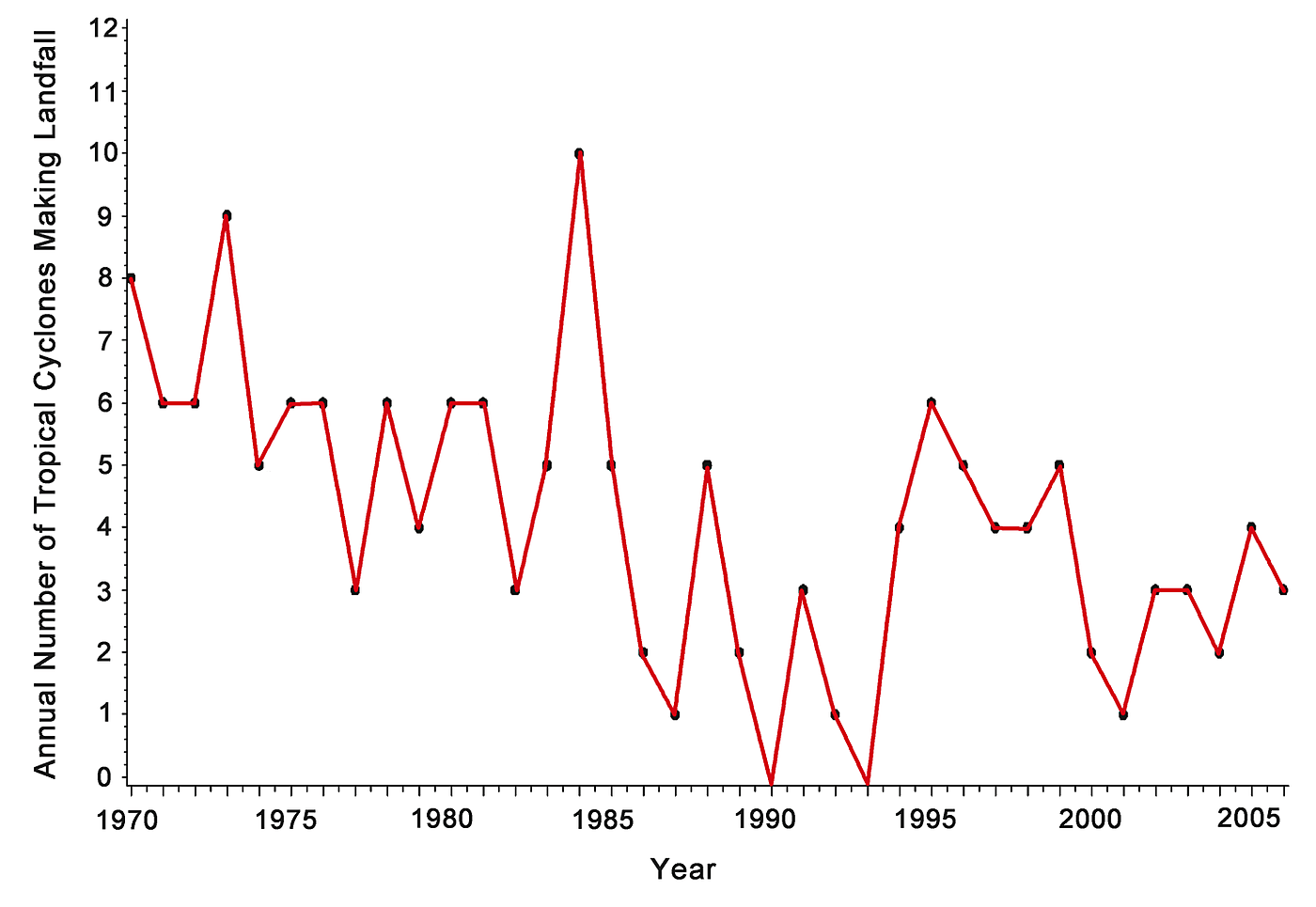 The dramatic “decrease in the damage from TCs observed at the end of the twentieth century,” according to Seo, “can be attributed in part to adaptation measures such as development planning, building codes, more accurate TC tracking and forecasts, early warning systems, and full preparedness and evacuations.” But, of course, it must also be acknowledged that the significant decline in TC frequency that was found to have occurred over the course of the study period must also have played a prominent role.

Whatever the case, one conclusion from this study is certain, the unprecedented increase in the twin evils of the modern environmental movement (rising temperature and CO2) has not led to more frequent or more severe tropical cyclones hitting Australia in recent decades. There may well be a temperature/tropical cyclone/CO2 signal; it’s just not the signal climate alarmists—and Australia has plenty—have long claimed!