Contrary to the claims of many transit advocates, regions that spend more money on transit seem to grow slower than regions that spend less. The fastest-growing urban areas of the country tend to offer transit service mainly to people who lack access to automobiles. Urban areas that seek to provide high-cost transit services, such as trains, in order to attract people out of their cars, tend to grow far slower.

Transit advocates often argue that a particular city or region must spend more on urban transit in order to support the growth of that region. To test that claim, I downloaded the latest historic data files from the National Transit Database, specifically the capital funding and service data and operating expenses by mode time series. These files list which urbanized area each transit agency primarily serves, so it was easy to compare these data with Census Bureau population data from 1990, 2000, and 2010.

I had to make a few adjustments to the population data to account for changes in the Census Bureau's definitions of urbanized areas. Between 1990 and 2000, the San Francisco-Oakland and Los Angeles urbanized areas were split into several parts, so I added up the various parts for 2000 and 2010 data. At the same time, the Miami, Ft. Lauderdale, and West Palm Beach urbanized areas were merged, so I added these three for 1990. The Oklahoma City urbanized area was radically reduced in size, with the apparent but incorrect result that it had lost population between 1990 and 2000. I used the growth rates for the Oklahoma City metropolitan statistical area instead. Since they are served by the same transit agencies, I combined Boulder and Denver data as well as Salt Lake, Ogden, and Provo-Orem data.

Although the United States has about 400 urbanized areas, data are incomplete for many of the smaller areas. Most transit debates take place in major urban areas, and what happens in Nampa, Idaho or Tyler, Texas is probably not too representative of what could happen in Indianapolis or Tampa. So, for my initial run, I compared only the 64 largest urban areas (number 65 being Concord, California, which was split off from San Francisco-Oakland in 2000). This includes nearly all urban areas with 2010 populations greater than 600,000 people. 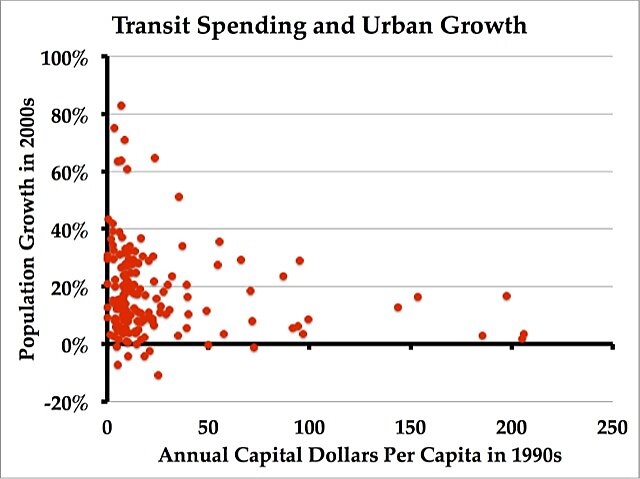 Adding more regions to the equation doesn't significantly change the results. For the next 100 largest urban areas, including nearly all urban areas with 2010 populations greater than 200,000, the range in annual per capita capital spending was much smaller--about $5 to $25--but the range in population growth was still large--from -7 percent to more than 80 percent. With one varying widely and the other not, correlations would have to fall, and they do. The negative correlation between 1990 operational expenditures and growth declined to zero, and most of the others declined slightly, but (except for the one that declined to zero) are still negative.

Needless to say, correlation does not prove causation. Many factors influence population growth, and transit spending is not likely to be the most important. However, the stiff taxes required by urban areas that spend heavily on transit represent a burden to consumers and businesses, and seem likely to contribute to a slowing of economic growth.

These results support that idea in two ways. First, the fact that the correlations are almost always negative shows that transit spending is not likely to support more rapid growth. Moreover, the fact that the results are stronger in the second decade--that more spending in the 1990s more strongly correlates with slower growth in the 2000s than in 1990s--suggests that, to the extent that there is a causative relationship, transit spending has a greater influence on growth than growth has on spending.