Goods-producing industries, by contrast, “consist of agriculture, forestry, fishing, and hunting; mining; construction; and manufacturing.” All of these goods-producing industries combined accounted for only 20.7 million jobs this June. That was fewer goods-producing jobs than in July 2000 (24.7 million) or August 1979 (25 million) or even May 1969 (22.9 million).  In other words, all long-term U.S. job growth has been in service occupations, not in manufacturing, mining, construction, and agriculture.

The United States is predominantly a service economy.  Many world-famous U.S. enterprises provide services all over the world – including entertainment, transportation, legal services, chain restaurants, advertising, accounting, medical tourism and college degrees.  In fact, rising U.S. service exports accounted for a third of total exports from January through May, and the U.S. surplus in services shrunk the total deficit by 31%.

Yet when President Trump and his trade war generals talk excitedly about bilateral trade deficits, they invariably talk only about goods - never services.  Commerce Secretary Wilbur Ross, for example, published “Free Trade Is a Two-Way Street” in The Wall Street Journal, writing only about “trade in goods” – as though a third of U.S. exports, most U.S. jobs and 69% of U.S. GDP is not worth mentioning.

A reporter for TheBalance.com (a financial website) inadvertently provided an excuse for widespread journalistic neglect of U.S. service exports by writing, “Please note that the Census provides trade data by country for goods only, not services.” That might have been a helpful warning if it was true. But Census does provide trade data for goods and services for most important countries, and for groups of countries such as the EU and OPEC.

Country trade data for goods and services are so commonly neglected, that I am going to post the data in several posts about various regions of the world, starting with Asia. 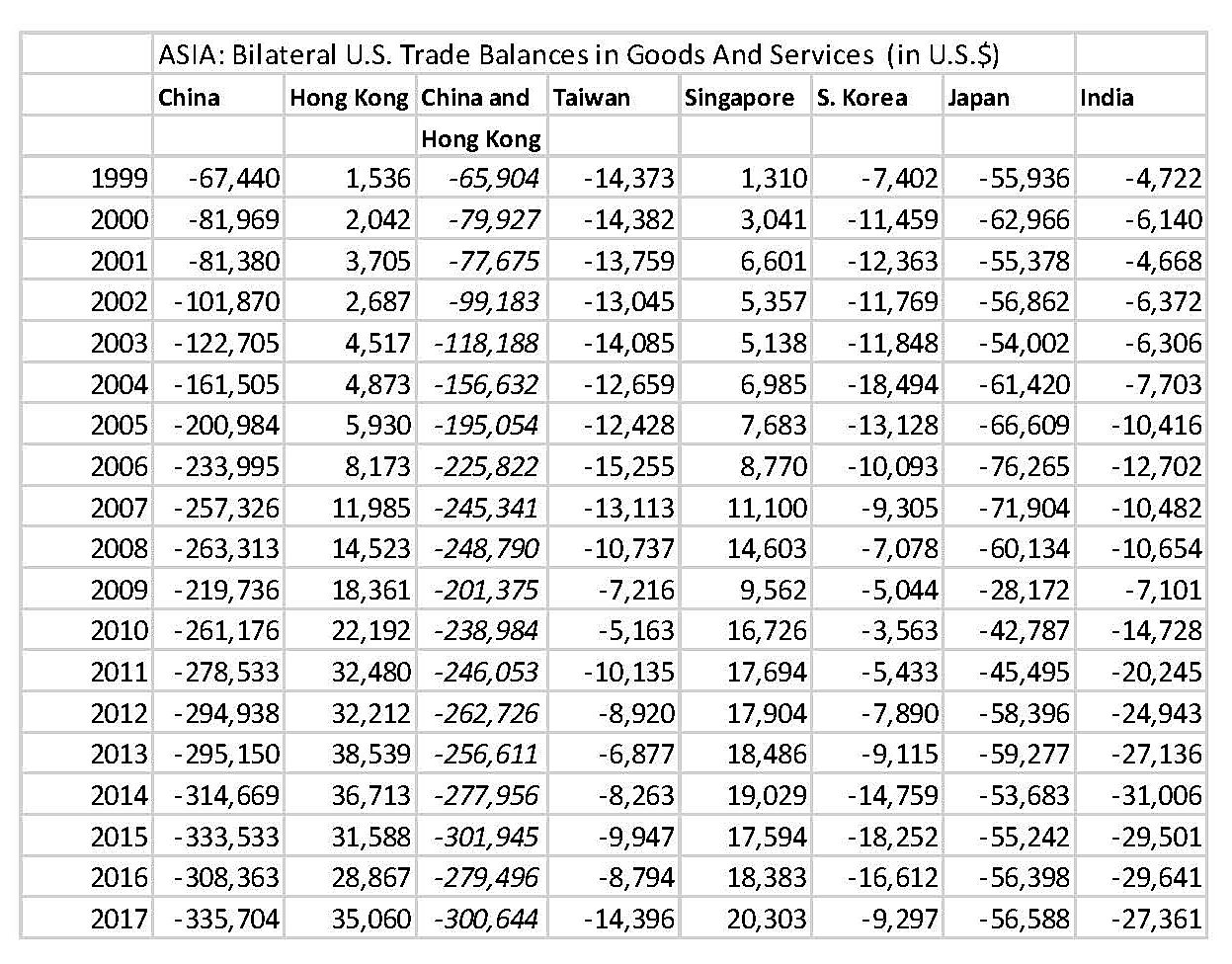 "Last year, we lost $500 billion on trade with China," Trump said at a March 23 news conference. That was fake news. The correct number was $335.7 billion once we count the $40.2 billion U.S. surplus in services. And there’s no excuse for not counting services. But everyone also forgets that Hong Kong is part of China and has no tariffs against the rest of China or the U.S. or anyone else (neither does Singapore). It’s like a Chinese Free Trade Zone. Since Hong Kong ran a $35 billion trade deficit with the U.S. in 2017, that leaves the combined China/Hong Kong net trade deficit with the U.S. at $300.6 billion – $200 billion less than the President claimed.

President Trump might nonetheless claim “we lost” $300 billion in trade with China last year, except getting $300 billion in desirable industrial and consumer goods from China was a U.S. gain, not a loss. Why else would we have bought the goods?

The benefit from trade comes from imports. Exports are the cost.

Foreigners don’t sell us goods because they’re collecting dollars as a hobby. U.S. dollars can ultimately be spent only on U.S. goods, services and assets, and they are frequently used to buy U.S. services and assets rather than goods.

If people in counties like Japan, India or China find better and safer investment opportunities in U.S. tech stocks and small caps than in their own local markets, then they have an incentive to sell us something to get the dollars to invest here. I long ago dubbed that “The Investment Opportunity Theory of Trade.” Foreigners bidding-up the value of U.S. equity or property is not American “borrowing.” And contrary to Mr. Trump it’s a win-win deal – not a loss.