A Tip of the Hat — or the Pitchfork? — to the Royal Wedding

In a remarkable coincidence, our friends at the Liberty Fund's Online Library of Liberty have chosen this week to celebrate a couple of great moments in republican (anti-monarchy) history. The quotation of the week is from that great libertarian radical, Thomas Paine, leading up to this conclusion:

We cannot conceive a more ridiculous figure of government, than hereditary succession.

And then the image of the week features two playing cards

from a charming collection of new designs for a deck which were issued during the French Revolution (1793-94). They were designed by moderate liberal republican supporters of the revolution (which included people such as the Marquis de Condorcet) who believed in the rule of law, free markets, the equality of women under the law, and the emancipation of slaves. As they said in their pamphlet they wanted to reinforce the principles of the revolution in such everyday items as playing cards, since the traditional designs had face or "court" cards depicting Kings, Queens, and Jacks who were the beneficiaries of the old privileged political order which had just been overthrown. It seemed obvious to them that a new design even for such mundane things as playing cards was required under the Republic to reflect the new principles of government and which "the love of liberty demands." 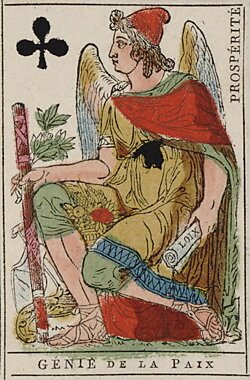 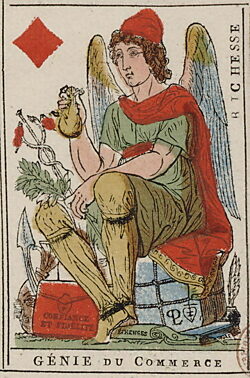 The Online Library of Liberty is an amazing resource, with full electronic texts of many classic works on liberty plus articles, essays, biographies, bibliographies, and other educational material about the texts. Check it out.