San Diego, CA — Over the course of my research into the conversion of former military bases, more than one person has suggested that I take a look at Liberty Station, the former Naval Training Center located in the Point Loma district of San Diego, that is now a thriving mixed‐​use community.

Operated for over 70 years as a Navy training base, NTC San Diego was included in the 1993 BRAC. It officially closed in April 1997. The city designated a master developer, Corky McMillin Cos. in 1999 to execute the reuse plan, and the site now hosts shops and businesses, schools, a megachurch, private homes, open spaces, and a vibrant arts district.

I visited there for the first time this week, and now I understand why the Pentagon’s Office of Economic Adjustment calls Liberty Station “one of the most successful base reuse projects in the country.”

Several people who have lived in San Diego for decades, and who have special understanding of Liberty Station’s history, were able to explain to me why that’s been the case.

“San Diego is a Navy town,” explained Jerry Selby, a program manager for the City of San Diego, and “San Diegans wanted [Liberty Station] to succeed.” There was extensive community input, and considerable planning. With some other closed bases, the local communities couldn’t come together on what they should become. “By contrast, Liberty Station was a defined piece of land. You could get your head around what it could — and should — be.”

I met Alan Ziter at The Lot, a movie theater complex in the historic Luce Auditorium, with an adjoining restaurant and bar that offers terrific views of the former base. As executive director for the NTC Foundation, the non‐​profit organization established in 2000 that’s responsible for the renovation and reuse of 26 historic properties in ARTS DISTRICT Liberty Station, Ziter has a unique perspective on what has been accomplished, and what remains to be done. 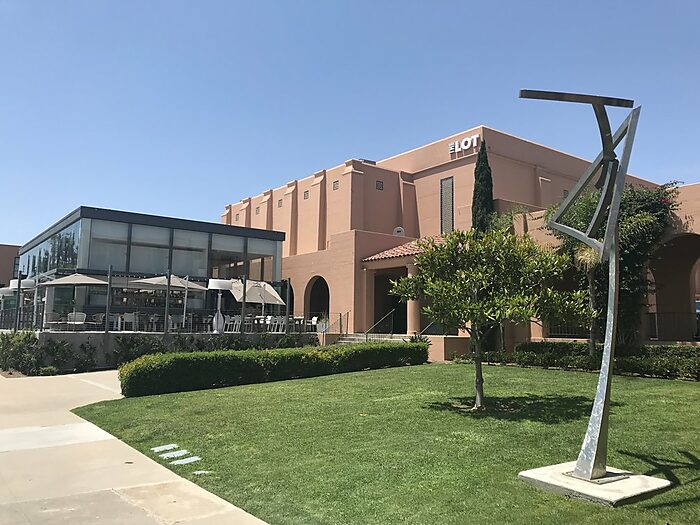 “This place was always about education and training,” Ziter explained as we walked among the galleries and past dance studios, “and I like to think that’s what it still does — except now for the arts.”

They do other educating, too, at Liberty Station. What started with High Tech High in the early 2000s is now the High Tech Village, a campus that also includes High Tech Middle and High Tech Elementary, all part of the San Diego Unified School District.

San Diego is home to Balboa Park, one of the finest urban parks in the country. But the flat open spaces of NTC Park on Liberty Station’s east side, along the San Diego Bay, have become popular with soccer players, picnickers, and 5K racers.

In one section of NTC Park are sets of black granite markers and trees along a paved walkway. Each set memorializes a submarine lost in World War II, 52 in all, and includes the story of how the boat was lost, and the names of those now “on eternal patrol.” It’s a simple but powerful memorial.

I was tempted to read them all, but I wanted to make my way to Liberty Public Market, a throng of eateries and boutique shops reminiscent of Boston’s Faneuil Hall or Philadelphia’s Reading Terminal Market, though on a smaller scale.

One of the other big attractions in the retail area is Stone Brewing, a sprawling restaurant and brew‐​pub that features more than 40 beers on tap. Business was steady but not crowded on a Wednesday evening. Maggie helped me navigate the extensive menu. She came to San Diego nine years ago from Chicago, and she’s been working at Stone for five.

She explained that it was a pretty typical weekday evening, but that it’s very busy on the weekends. People come with kids and big groups. They just say, “let’s meet at Stone,” knowing they’ll be able to seat them. You generally don’t need to reserve a room or big table, she explained, although they also have numerous rooms and meeting spaces suitable for private events.

My favorite part of the story? When I pointed out what a really terrific space it was, and all the more remarkable for having once been a former Navy mess hall, she chuckled. “I know! My grandfather trained here during the Korean War.”

Liberty Station has managed to preserve the historic charm of this place that hosted hundreds of thousands of sailors on their way to war. It honors the memory of those who didn’t return. And it is now one of the coolest places that I’ve ever visited, in one of my favorite American cities. You should definitely check it out.