Those Phantom Spending ‘Cuts’ from 2011

The Washington Post’s David Fahrenthold recently took a look at the $38 billion in spending cuts that Republicans and Democrats agreed to in 2011 in order to avoid a government shutdown. Fahrenthold estimates that $17 billion of those “cuts” were little more than budgetary gimmicks. For instance, $6 billion in authorized spending for the previous year’s decennial census were merely wiped off the books and counted as a “cut.”

Fahrenthold’s piece is a good reminder of how unserious politicians from both parties are about cutting spending. But I want to make two additional points.

First, real or not, let’s not forget that the $38 billion in “cuts” were a drop in the bucket that year compared to total spending, the deficit, and even interest on the debt: 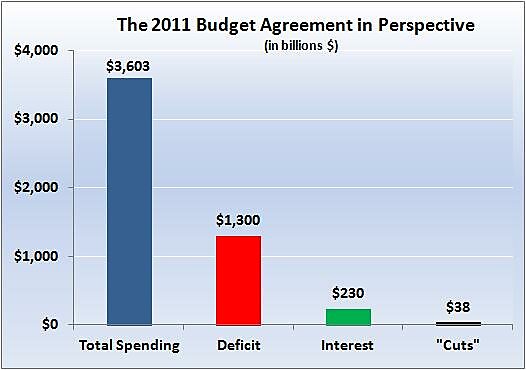 Second, unless entire agencies or programs are terminated, spending cuts will probably end up only being temporary. Following the 2011 agreement, I demonstrated this by noting that many of the programs that were cut were also cut in a 1995 deal:

They were all cut in 1995 under a rescissions package engineered by then-Speaker Newt Gingrich and cut last week in the budget agreement reached by Republican and Democratic leaders.

The lesson here is that there’s a big difference between spending cuts and terminating entire agencies and their programs. Like the mythological Hydra, the stump has to be burned after the head is cut off or else it’ll grow back.