Midwest prices for diammonium phosphate, or DAP, jumped 29% in the third quarter, the most since 2010, according to a Green Markets index. Prices for a lower concentration phosphate fertilizer also surged the most in a decade, by 34%. The two chemicals make up the primary component for many phosphate‐​based fertilizers used by American crop farmers.

Prices spiked after U.S. fertilizer firm Mosaic Co. petitioned the U.S. Department of Commerce and U.S. International Trade Commission in June, saying that fertilizer imports from Morocco and Russia were unfairly subsidized. That prompted an investigation and raised the prospect of countervailing duties. The two countries are the largest sources of the commodity for the U.S. in the most recent crop year, through June.

Government payments to farmers have surged to historic levels under President Donald Trump as the Agriculture Department floods the industry with cash to stem the financial losses from Trump’s tariff fights and the coronavirus pandemic.

But as agriculture grows more reliant on unprecedented taxpayer support, farm policy experts and watchdog groups warn the subsidies are growing too big and too fast, with no strings attached and little oversight from Congress—and that Washington could have a difficult time shutting off the spigot. 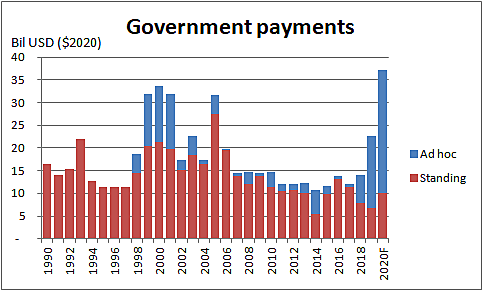 No word yet on whether other foreign producers are on Double Secret Probation.