If There’s a Grand Bargain, Taxpayers Should Get a Tax Cut Rather than a Tax Hike

The Washington metropolitan area has become America’s wealthiest region because trillions of dollars are taken every year from the productive sector of the economy and then divvied up by the politicians, bureaucrats, lobbyists, and interest groups that benefit from federal largess.

But there’s always an appetite in Washington for even more money. Former senator Kent Conrad (D-ND) just wrote in the Washington Post that “Our country needs more revenue to help us get back on track.”

I guess that means back on track to becoming Greece, though I suspect he would have an alternative explanation. All I can say for sure is that he probably wasn’t paying attention when I testified to his committee last year about pro-growth tax policy. 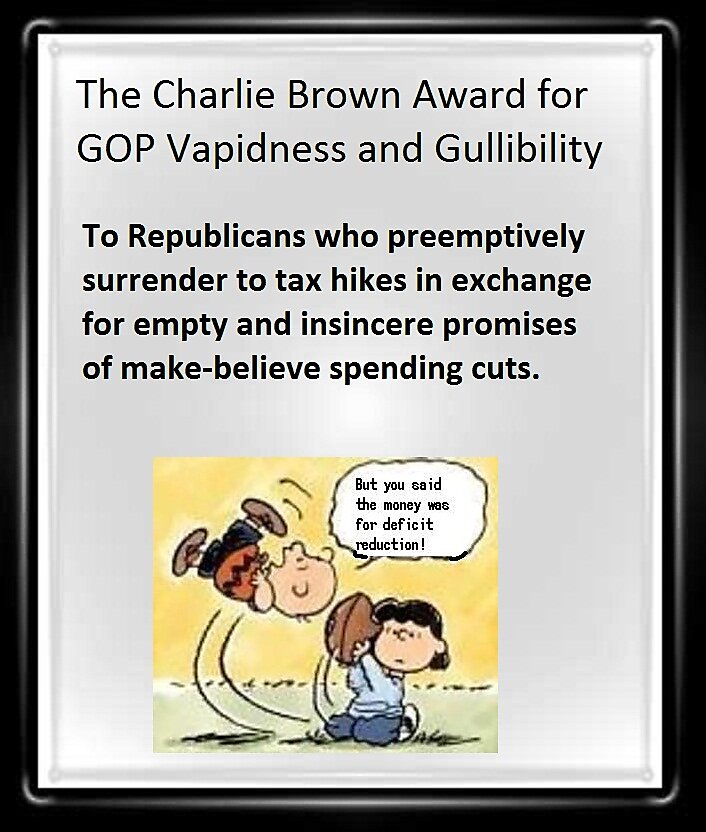 But it’s not just Democrats who are greedy for more of our money. Republican Congressman Tom Cole of Oklahoma joined the Charlie Brown Club by stating, “we’re willing to put more revenue on the table.”

If you ask politician why they want more revenue in Washington, they invariably state that America’s long-term fiscal challenges are so large that you need a “balanced” package.

But why should there be “balance” between tax hikes and spending cuts (which would merely be reductions in planned increases) when more than 100 percent of America’s long-run fiscal problem is because of a rising burden of government spending?

Does that sound like an exaggeration? Well, check out this data from the Congressional Budget Office’s 2013 Long-Term Budget Outlook.

As you can see, tax revenues are supposed to jump substantially as a share of GDP in coming decades. Indeed, they will rise far above the long-run average of 17.7 percent of economic output.

In other words, a big increase in the tax burden already is set to occur, largely because of real bracket creep. This means tax cuts (ideally accompanied by tax reform) are needed to protect taxpayers from rising tax rates.

And if we want to deal with America’s real fiscal challenge, that means modest spending restraint in the short run and genuine entitlement reform in the long run.

P.S. Do you need more evidence that taxes should go down rather than up? Well, the New York Times inadvertently revealed that the only “grand bargain” that actually resulted in a budget surplus was the 1997 pact that lowered the tax burden.

P.P.S. I’ve admitted that—in theory—it might be reasonable to acquiesce to a tax hike if accompanied by some genuine reforms to control spending. But in reality that will never happen. The evidence from Europe is very persuasive that more revenue simply leads to a larger burden of government spending.