Thanks to Tax Competition, Corporate Tax Rates Continue to Fall in Europe

Many people assume that Europe is the land of high‐​tax welfare states and America is an outpost of laissez‐​faire capitalism. We should be so lucky. The burden of government in America is still lower than it is in the average European nation, but the United States is a lot closer to France than it is to Hong Kong — and the trend is not comforting. 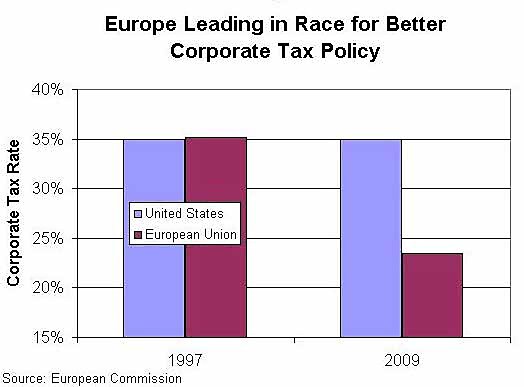 This is not to say that European politicians are reading Hayek and Friedman (or watching Dan Mitchell videos on corporate taxation). Almost all of the positive reforms are because of tax competition. Thanks to globalization, it is increasingly easy for labor and (especially) capital to cross national borders to escape bad policy. As such, nations now have to compete for jobs and investment, and this liberalizing process is particularly powerful among nations that are neighbors.


Fortunately, the politicians did not succeed in any of these efforts. As such, tax competition remains alive and corporate tax rates continue to fall. What remains to be seen, however, is whether America will join the race to lower corporate tax rates — and more jobs and investment.