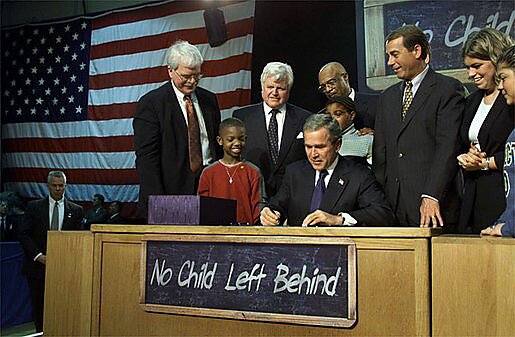 Today, Sen. Ted Cruz (R-TX) and Rep. Bradley Byrne (R-AL), in conjunction with U.S. Secretary of Education Betsy DeVos, will unveil a bill to create a $5 billion scholarship tax credit, an unprecedented federal school choice effort. An op‐​ed all three have in USA Today spells out both the good of federal school choice, and inadvertently, the potential bad which makes it too dangerous to justify.


First, the good. DeVos, Cruz, and Byrne argue, quite rightly, that “education isn’t about school systems. It is about school children.” If you recognize basic reality, you’ll know that all children and families are different—different talents, values, dreams—hence it makes no sense to say all should get uniform education. But opposing school choice is de facto endorsing the idea that education should be largely uniform. One size must fit all.


They also make another crucial point, one that is starting to elicit push‐​back from public schooling advocates who insist that public schooling and public education are synonymous. DeVos, Cruz, and Byrne write that their proposal is not “an attack on public education.” Of course it isn’t. For one, they say their proposal would allow credit‐​eligible funds to be used for public school options. More broadly, just as public assistance doesn’t mean every recipient of help must go to a government grocery store, nothing about public education implies government must supply the schools. Indeed, we’ve been moving away from things like government housing projects for decades.


Now the bad. School choice is about individualization and freedom, and almost certainly that is what DeVos, Cruz, and Byrne want. But federal initiatives are a terrible way to deliver that. The reality is that what the feds fund, even indirectly, they inevitably want to control. DeVos, Cruz, and Byrne specifically acknowledge that historical reality in federal education policy. They write, “A series of administrations on both sides of the aisle have tried to fill in the blank with more money and more control, each time expecting a different result.” Note that the primary vehicle for that control, the Elementary and Secondary Education Act, started aimed just at funding low‐​income districts. It eventually became the uber‐​controlling No Child Left Behind Act.


DeVos, Cruz, and Byrne are looking to skirt the control problem, sticking with tax credits instead of vouchers, and letting states opt in. But not only is this unconstitutional—taxes are authorized to execute specific, enumerated powers, not to lightly engineer state policy—it won’t, ultimately, prevent encroaching federal control. If enacted, the credit would spur people to demand their states participate, and as more schools benefited from federally connected scholarships all schools would be financially pressured to use them. But the federal government will have the power to decide which state programs are or are not eligible, and on what grounds. As Corey DeAngelis and others have noted, what happens when, instead of a President Trump, we have a President Sanders or Harris and they don’t like the policies of religious schools, or maybe how economics is taught? Suddenly lots of private schools and other options will be federally pressured to look very similar—shape up or credit eligibility goes away—and true choice will be curtailed.


Even the roll out of the proposal raises the specter of federal control. Though the great benefit of tax credits is they do not use government money, and hence are less prone to regulation than vouchers, DeVos, Cruz, and Byrne write that through their proposal they “are putting forward a historic investment in America’s students.” That sure sounds like the federal government is doing the funding, and what government funds it tends to control. Also, that Secretary DeVos is so prominent in the proposal release at least symbolizes not only federal intervention in education policy, but a strong connection to the executive—the dangerously regulatory—branch of the federal government.


School choice is great, and DeVos, Cruz, and Byrne recognize that. But as with so many policies, we cannot let our hearts overcome either our adherence to the rule of law—the Constitution—or make us underestimate the potentially crushing unintended consequences that the product of our pure motives may have.