Testifying to the Joint Economic Committee about “Debt Limit Brinksmanship”

As we get closer to the debt limit, the big spenders in Washington are becoming increasingly hysterical about the supposed possibility of default if politicians lose the ability to borrow more money. 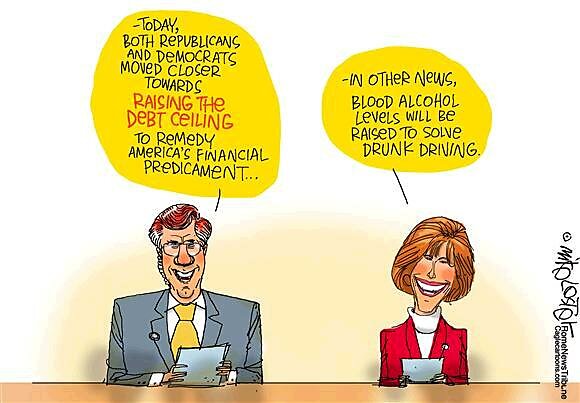 I testified yesterday to the Joint Economic Committee on “The Economic Costs of Debt-Ceiling Brinkmanship" and I explained (reiterating points I made back in 2011) that there is zero chance of default.

Why? Because, as I outline beginning about the 3:10 mark of the video, annual interest payments are about $230 billion and annual tax collections are approaching $3 trillion.

I actually made five points in my testimony. The first three should be quite familiar to regular readers.

First, America's main fiscal problem is that government is too big. That's the disease. Deficits and debt are symptoms of that underlying problem.

Third, we've made some progress in the last two years thanks to genuine fiscal restraint, and we can balance the budget in a very short period of time if lawmakers impose a very modest bit of spending discipline in the future.

The fourth point, which I already discussed above, is that there's no risk of default - unless the Obama Administration deliberately wants that to happen. But that's simply not a realistic possibility.

My fifth and final point deserves a bit of extra discussion. I explained that Greece is now suffering through a very deep recession, with record unemployment and harsh economic conditions. I asked the Committee a rhetorical question: Wouldn't it have been preferable if there was some sort of mechanism, say, 15 years ago that would have enabled some lawmakers to throw sand in the gears so that the government couldn't issue any more debt?

I closed by drawing an analogy to the situation in Washington. We know we're on an unsustainable path. Do we want to wait until we hit a crisis before we address the over-spending crisis? Or do we want to take prudent and modest steps today - such as genuine entitlement reform and spending caps - to ensure prosperity and long-run growth.

Seems like the answer should be simple...at least if you're not trying to get reelected by bribing voters with their own money.

P.S. My argument for short-term fighting today to avoid fiscal crisis in the future was advanced in greater detail by a Wall Street expert back in 2011.

P.P.S. You can enjoy some good debt limit cartoons by clicking here and here.