Emily Ekins and I have an op‐​ed in today’s Politico pointing out that while the Tea Party is united on economic issues, there is a split virtually right down the middle between traditional social conservatives and those who think government should altogether stay out of the business of “promoting traditional values.” Candidates and representatives hoping to appeal to the Tea Party, we argue, need to focus on a unifying economic agenda that takes into account this strong libertarian undercurrent.


We conducted a survey of 639 attendees at the October 9, 2010 Tea Party Convention in Virginia, one of the larger state Tea Party gatherings of its kind to date. We included the same questions from Gallup and the American National Election Studies that David Boaz and I have used to identify libertarians in our previous studies, “The Libertarian Vote” and “The Libertarian Vote in the Age of Obama.”


These findings help refute the assumption that the Tea Party is just another conservative group, both fiscally and socially. The data should also caution Republicans not to over‐​interpret potential midterm gains in the House and Senate as a mandate for social as well as fiscal conservatism.


Our survey replicated the methodology of a Politico/​Targetpoint survey from a Tea Party rally in April, which also revealed an even split between libertarians and conservatives. At the time, journalist David Weigel criticized this finding because it sampled a tea party rally that featured Ron Paul. No surprise, Weigel reasoned, that the survey “skewed” libertarian because Ron Paul’s supporters “were out in force.”


This Tea Party Convention in Virginia also featured Ron Paul—as well as Lou Dobbs, Rick Santorum and Ken Cuccinelli. With this more wide‐​ranging speaker line up, it would be harder to argue that the crowd skewed libertarian. If anything, we might have expected the sample to skew conservative.


While ours and Politico’s surveys sampled local tea party events, add to this a new national survey from The Washington Post/​Kaiser/​Harvard on the role of government. It found respondents who support or lean toward the tea party split on the social issues: 42 percent moderate‐​to‐​liberal, 57 percent conservative or very conservative. These three data points, taken together, suggest that our findings would likely hold up if we repeated the survey at other tea party events nationwide.


Many still mistake the tea party as one large group, sharing common interests, which our research shows is incorrect. For instance, Washington Post columnist Harold Meyerson made this mistake, in an widely circulated op‐​ed earlier this week, asserting that the Tea Party has “the worldview of the American right — and the polling shows conclusively that that’s who the Tea Party is that.” As the chart below shows, libertarian and conservative Tea Partiers agree on economic issues, but libertarians are less concerned about social issues. 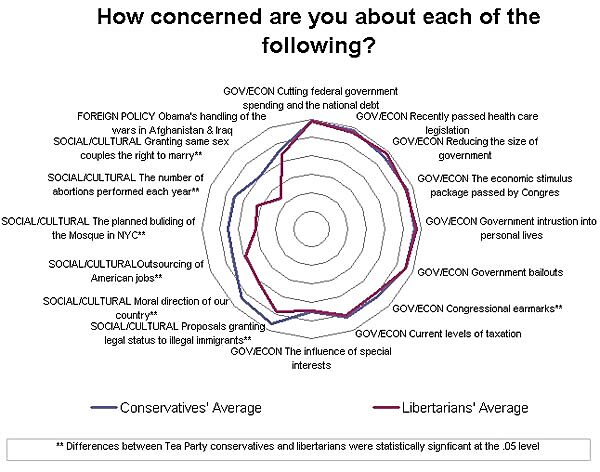 Both groups are extremely concerned about the recently passed health care reform, cutting federal government spending, and reducing the size of government. However, Tea Party libertarians are less concerned than conservatives about the moral direction of the country, gay marriage, immigration, job outsourcing, “the Mosque in NYC,” and abortion. While these differences may seem subtle, given the question wording we used, small changes are statistically significant.


It is important to recognize that these groups are not necessarily consistently ideological on all fronts. For example, we shouldn’t expect Tea Party conservatives to reflect all the views of William F. Buckley, Jr., nor Tea Party libertarians to reflect all the views of John Stossel or scholars at Cato. Nevertheless, the two groups were unified on economic issues but were different on social and cultural issues at a statistically significant level.


One finding surprised me. While we know the word “libertarian” remains unfamiliar to many who hold libertarian beliefs, the word may be gaining traction. On surveys, most libertarians identify themselves as independent, moderate or, reluctantly, conservative. However, in our survey we included an option for respondents to self‐​identify as “libertarian.”


Surprisingly, 35 percent of respondents who hold libertarian views self‐​identified as such. In previous surveys, we’ve found only 2 to 3 percent self‐​identify as “libertarian” nationally. To the extent that Tea Partiers talk to their neighbors and friends, perhaps we will begin to see the word “libertarian” catch on. This would certainly be good news for the “libertarian brand,” and a possible trend worth exploring in future research.


Emily and I will be writing up our findings as part of a longer study. And Emily’s more extensive research on the Tea Party, including her widely circulated analysis on Tea Party signs, will be part of her doctoral dissertation for UCLA. In the meantime, here is our survey questionnaire, and some charts showing further break down between libertarians and conservatives. Please let us know if you have additional data questions.