That’s all caveat to sharing an image created by James Sinclair that’s making waves on the Facebook. It makes a hopeful statement, I think, about the Occupy Wall Street movement and its potential or actual kinship with Tea Partyism. There’s something wrong in the country, and this image suggests that there might be consensus on the framing of what’s wrong: the unity of government and corporate power against people’s freedom and prosperity. 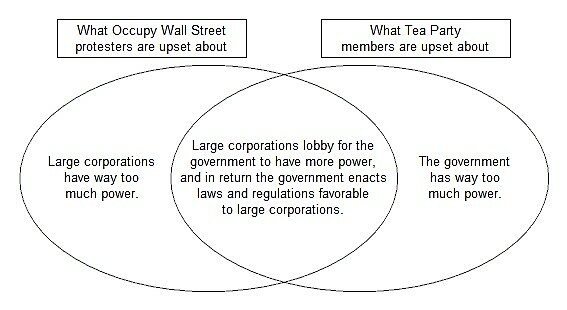 There are plenty of reasons to reject the possibility of alliance between Tea Partyism and OWS, but not necessarily good ones. The easiest out is to pour this new wine into old bottles and characterize OWS as dirty hippies using retrograde protest tactics. Many are kinda like that. But that stuff was a couple of decades ago. No, wait—four decades ago. These kids have no direct knowledge or experience of, say, Kent State, and older observers might be too prone to fitting them into a pattern that doesn’t exist for them.


To the extent the substance of their grievance is, or can be turned to, corporations’ use of government power to win unjust power and profits for themselves, that’s a grievance I can sit in a drum circle for.