Taxpayers Against Earmarks Makes its Debut

Taxpayers Against Earmarks is a new effort to rid the federal legislative process of some of its most acute horse-trading: earmarks. Find it at the cleverly named URL, EndingSpending.com. 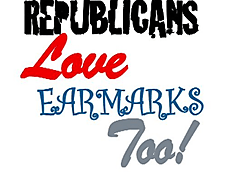 There's little doubt that many spending earmarks are part of a subtle---or not-so-subtle---quid pro quo in which federal legislators buy votes by directing funds to favored home-state or home-district interests. Taxpayers Against Earmarks has a well-produced web site that invites people to sign up and join the anti-earmark effort.

Earmarked spending is a small part of the overall budget, of course, but earmarking is emblematic of the "favor factory" that Congress has become as the federal budget and federal power have bloated. Federal spending is appropriate in the small number of cases when it provides national public goods that benefit the country as a whole, but refurbishing local museums, funding projects at state universities, and requiring the military to buy from a particular defense contractor do not benefit the general welfare. Taxpayers Against Earmarks is working to begin the process of getting federal spending under control.