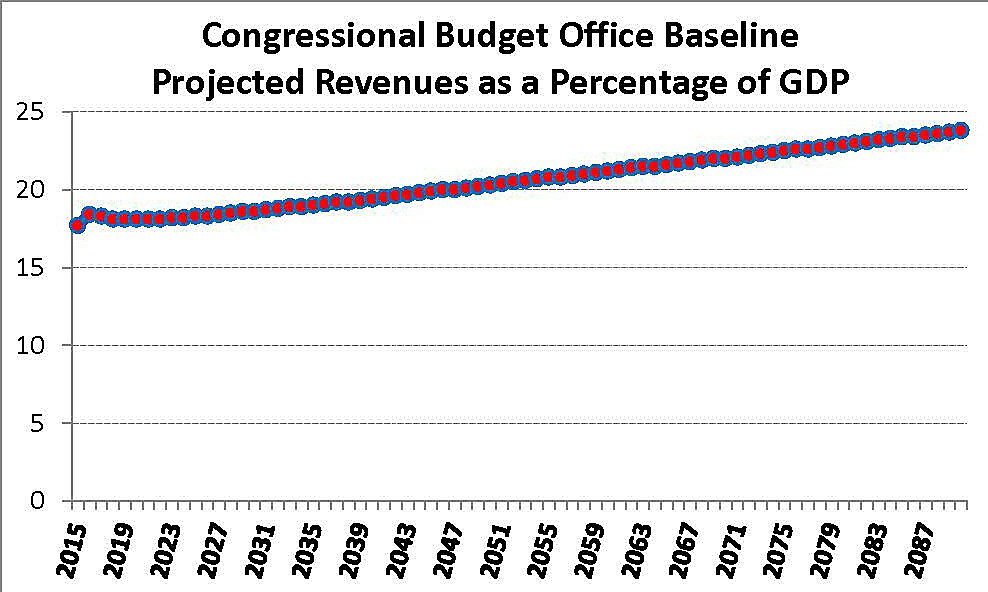 When the Brookings Institution and Urban Institute claim any tax reform will “lose trillions” they are comparing their static estimates of revenues from those plans (which assume tax rates could double or be cut in half with no effect on growth or tax avoidance) to totally unrealistic “baseline” projections from the Congresional Budget Office. Those CBO projections assume that rapid 2.4% annual increases in real hourly compensation over the next decade will push more people into higher tax brackets every year. As a result, the average tax burden supposedly rises forever — from 17.7% of GDP in 2015 to 19.9% in 2045 and 23.8% by 2090. And, typical of static estimates, this ever‐​increasing tax burden is imagined to have no bad effects on the economy.


Such a high level of federal taxation never happened in the past (20% was a record set in the tech stock boom of 2000) and it will never happen in the future. In short, this is an entirely bogus basis by which to judge tax reform plans.


A far more sensible question would be this:


Will the Cruz or Rubio tax reforms raise just as much money as the Obama “tax increase” has — namely, 17.5% of GDP from 2013 to 2015. If so, then real tax revenues will grow faster after reform because real GDP growth will surely be at least 1.2% faster — or a middling 3.5% a year, which is all the cautious Tax Foundation estimates suggest.