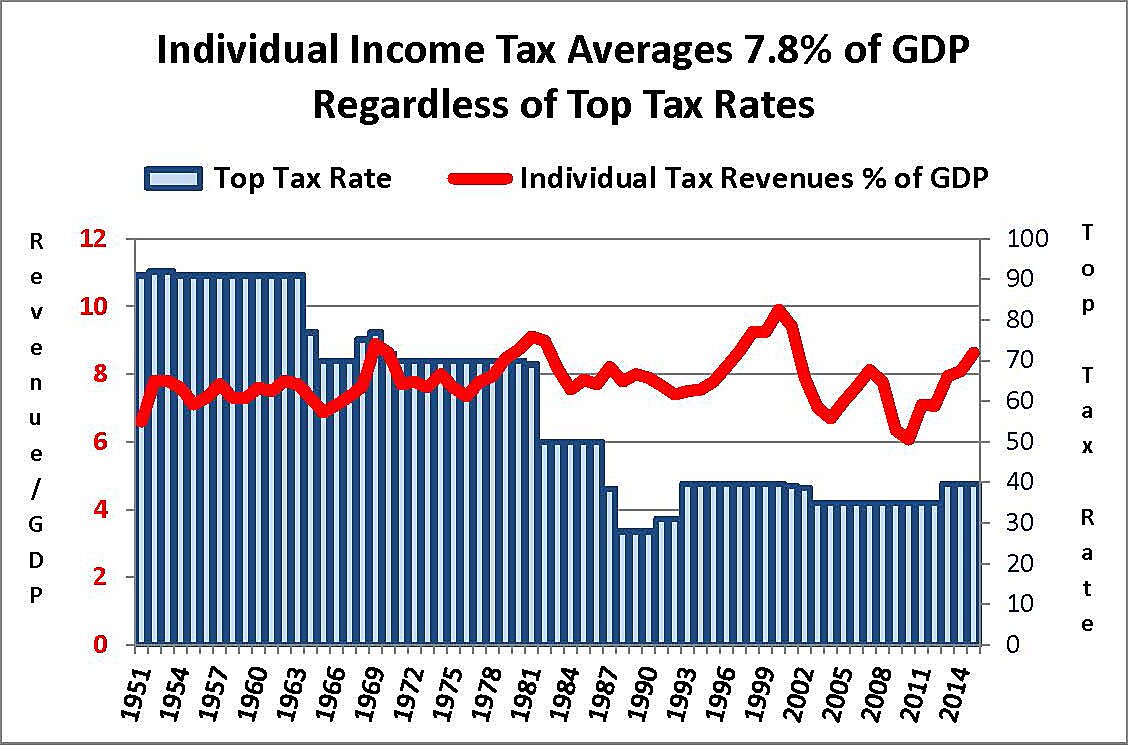 Among Democrats seeking their party’s nomination, all candidates have proposed raising the highest tax rates to a least 43.6% (Clinton) or 45% (O’Malley).  Sanders famously admired Ike’s top tax rates of 91-92% from 1951 to 1963, but later suggested he’d settle for keeping top brackets of 43, 48 and 52% (including capital gains) while raising all the lower rates by 2.2%. Clinton and O'Malley assert or assume that raising only tax rates on the highest incomes would raise vast sums, enough to finance their many proposed new spending plans for various grants and benefits.

Leading Republican candidates, by contrast, would at least roll-back the highest tax rate to 35% (Rubio), 28% (Bush, Kasich & Christie) or 25% (Trump).  Senators Cruz and Paul would go further by replacing both payroll and corporate taxes with a 15-16% value-added tax (on payrolls and profits) while keeping a 10-15% flat tax on income.  Huckabee hopes to replace income and payroll taxes with a ~30% federal tax on all retail sales.  Carson and Santorum suggest a flat tax of 14.9% or 20% respectively.

Let’s put aside the VAT and lower corporate tax rates for now, to focus on individual income tax rates.

As the graph shows, the U.S. has had considerable experience with top tax rates as high as 91-92%, as low as 28%, and everything in between.

Revenues from the individual income have never reached 10% of GDP, and exceeded 9% only 5 times in U.S. history – 1944, 1981 and 1998-2000.  Revenues came close to 9%, briefly, when the surtax of 1969 raised all tax rates by 10%, not just the highest rates.  Revenues can rise as a share of GDP because GDP falls, of course, which is what happened after 1969 and 1981.  The unprecedented revenue surge in the tech boom of 1998-2000 has much to do with cutting the capital gains tax from 28% to 20% in 1997 combined with the quintupling of NASDAQ stocks, which also created big stock option payouts for thousands of non-executives.

Why does all this history matter?  Because Republican Tax Reform plans are being judged against last August’s Congressional Budget Office (CBO) “baseline projection” for revenue.  Failure to hit those baseline numbers has been described as “losing trillions” over a decade.   But baseline revenue projections are not forecasts, as the CBO warns, and they totally unrealistic.

First of all, baseline projections are required to assume that dozens of supposedly temporary tax breaks (like the 30% tax credit for solar and wind investments) magically sunset on schedule and disappear, even though they are routinely “extended” by Congress at the end of each year.   This is why the CBO just reduced projected 2016-2020 baseline revenues from 18.4% of GDP to 18.1%.  The new revenue estimates for the next few years are already much lower than the August projections being used to score Republican tax reforms.  And about $700 billion of the alleged 10-year revenue loss from tax reform is due to this fanciful convention of assuming no tax breaks are ever extended.

The second problem is that even though individual tax revenues have rarely touched 9% of GDP, CBO baseline projections assume revenues from individual income taxes supposedly rise from 8.1% of GDP in 2014 to 9% in 2017, 9.2% in 2020, 9.6% in 2026 and so on – reaching 13.3% of GDP by 2090 – according to a Tax Policy Center study.  The main reason is that the CBO assumes real household incomes grow faster than the assumed 2.4% inflation and the combination pushes more and more families into higher and higher tax brackets each year.  Because these are totally static estimates, the ever-increasing average individual tax burden is assumed to have no effect at all on economic growth or tax avoidance.

In short, much of the alleged “revenue loss” from Republican proposals to eliminate tax rates higher than 28% is because such reforms rule out the “real bracket creep” that makes the fanciful CBO baseline revenue projections rise year after year, forever.