In “The $5 Trillion Question: How Big Is Romney’s Cut” Wall Street Journal reporters Damlan Paletta and John D. McKinnon echo, once again, the journalistic convention of contrasting “the nonpartisan Tax Policy Center” with “the conservative American Enterprise Institute.”  In the English language, the opposite of "conservative" is not "nonpartisan."   On the contrary, the phrase “nonpartisan” applies equally to the American Enterprise Institute (or Cato Institute) as it does to Tax Policy Center (TPC) -- a front for the Brookings Institution and Urban Institute.   To be “nonpartisan” does not mean non-ideological, unbiased or even competent.  It simply means following a few rules so the IRS will allow the organization to receive tax-deductible contributions.   Governor Romney wants to severely curb such deductions (including his own), which does not necessarily make the TPC a disinterested observer, even if there really were one or two closet Republicans (or even non-Keynesians) at the TPC. 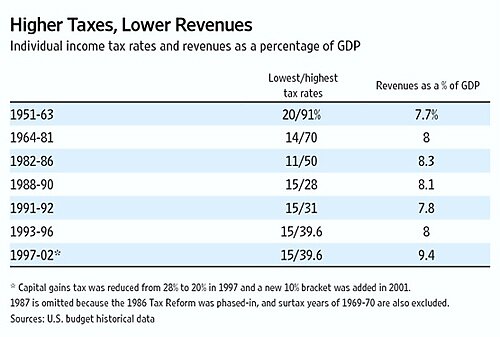 The U.S. already cut marginal tax rates across-the-board by more than 20 percent in 1964 and 1984 (the 1981 law, like that of 2001, was foolishly phased-in).  In both cases, the Table shows that revenues from the individual income tax were higher than before, as a share of GDP.  The economy grew much faster too, raising payroll and corporate tax receipts.   Until the TPC can explain how and why that happened, they cannot even pretend to predict that Romney’s more modest tax reform will lose any revenue, much less $5 trillion.  Incidentally, deductions were not significantly curbed in the tax laws of 1964 or 1981, or in the Tax Reform of 1986 (which merely substituted reduced itemized deductions for a much larger standard deduction).  If Romney puts a cap on deductions, either as a percentage of AGI or as a dollar limit, the net effect of his plan would raise revenues, particularly from people like Warren Buffett and Mitt Romney (who deduct millions in charitable contributions).

The Tax Policy Center’s fundamental error is to assume no behavioral response at all to lower tax rates – an “elasticity of taxable income” (ETI) of zero.   The academic evidence is that ETI is at least 0.4 for all taxpayers, as Martin Feldstein observed, mostly because ETI is above 1.0 for the top 1 percent, as I recently explained in the Journal.  Cut top rates and the rich report more income; raise top rates and much of their income disappears -- through reduced economic activity and increased avoidance.