Yesterday, I looked at migration from high‐​tax to low‐​tax states. Today, the Wall Street Journal focuses on wealthy tax exiles from the Northeast in Florida: “President Donald Trump and Carl Icahn both announced in the fall that they’ll be making Florida their primary residence, joining other high‐​profile executives like financiers Barry Sternlicht, Eddie Lampert and Paul Tudor Jones.”

The Journal had accounting firm BDO run some numbers: “A New York couple filing jointly with $5 million in taxable income would save $394,931 in state income taxes by moving to Florida.”

I noted in this study that the wealthy often bring their businesses and philanthropy with them, so the greediness of high‐​tax states really boomerangs on them. As the Journal notes:

Multimillionaires aren’t just moving their families south, they are taking their businesses with them, says Kelly Smallridge, president and CEO of the Business Development Board of Palm Beach County. “We’ve brought in well over 70 financial‐​services firms” in the past few years, she says. “The higher the taxes, the more our phone rings.”

You may think it is unfair that states such as New York are losing their residents and businesses. But they’ve only got themselves to blame because the high taxes are caused by excessive spending. Indeed, the difference between total state and local government spending in New York and Florida is staggering.

The chart shows Census Bureau data for 2017. New York and Florida have similar populations, yet state and local governments in New York spent twice as much as governments in Florida, $348 billion vs. $177 billion. 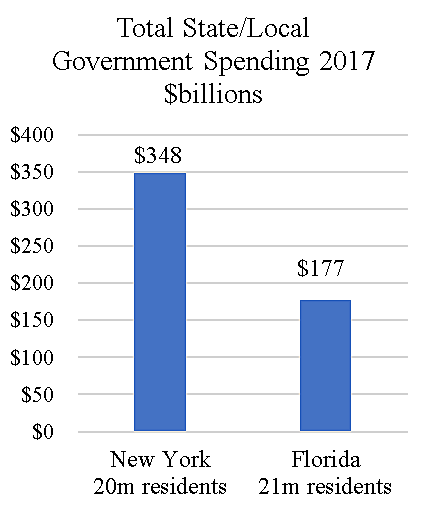