The Census Bureau has released estimates of state population changes between July 2018 and July 2019. One component of population changes is migration between the states. The new Census data show that Americans are continuing to move from high‐​tax to low‐​tax states.

This Cato study examined interstate migration using IRS data and found that people are moving, on net, from tax‐​punishing places such as California, Connecticut, Illinois, New York, and New Jersey to tax‐​friendly places such as Florida, Idaho, Nevada, Tennessee, and South Carolina. The Census data confirms the trends.

On the right, nearly all of the high‐​tax states have net out‐​migration. The exception is Maine. The blue dots on the far right are Hawaii and New York, which each have domestic migration losses of nearly 1 percent a year.

On the left, nearly all of the net in‐​migration states have taxes of less than about 8.5 percent. If policymakers want their states to attract residents, they should reduce their household tax burdens to 8.5 percent of personal income or below. The outlier at the bottom left is Alaska.

Interstate migration patterns tend to persist over time. The biggest loser states, such as Illinois and New York, have large and chronic problems. To stem the losses and strengthen their economies, these states should reduce taxes, slim down their governments, and cut regulations to enhance freedoms. 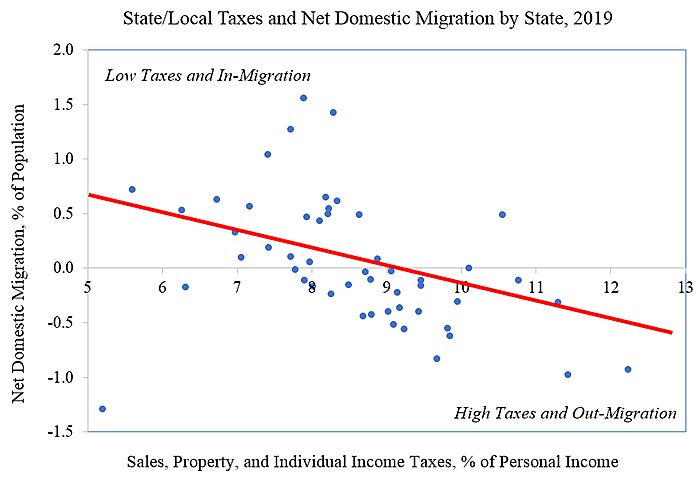