Conventional wisdom among the D.C. punditocracy is that protectionism, while likely bad economics, is good politics because it can boost critical “Rust Belt” swing states that have large manufacturing sectors and have been hit hard by globalization. A new St. Louis Fed study, however, shows why this rudimentary calculus is misguided.

Examining the effect of President Trump’s “trade wars” (i.e., tariffs and foreign retaliation) on U.S. manufacturing industries and states that are disproportionately dependent on imports or exports, authors Ana Maria Santacreu and Makenzie Peake find that several such states — including Michigan and Ohio — experienced weaker economic growth and employment in 2018 than their less‐​exposed neighbors. In particular, they make the following findings:

First, the U.S. manufacturing industries that more heavily rely on imported intermediate products (and are thus “exposed” to potential U.S. tariffs) are (i) Coke and petroleum; (ii) Motor vehicles and trailers; (iii) Other transport equipment; (iv) Basic metals; and (v) Rubber and plastic products. The U.S. states that most heavily specialize in these trade‐​exposed industries (and are thus “exposed” too) are (i) Louisiana; (ii) Michigan; (iii) Hawaii; (iv) Washington; and (v) Ohio. For Michigan, in particular, the authors note that it “is one of the top U.S. producers in the Motor vehicle and trailers industry, which accounts for 43 percent of its total value added.” And, as you can see from the map below, all of the states in America’s “auto alley” face similar levels of import reliance (and thus trade war exposure).

Second, the U.S. industries that export more intermediate goods to the world (and are thus “exposed” to potential retaliation by foreign governments) are (i) Other transport equipment; (ii) Computer, electronic, and optical; (iii) Machinery and equipment; (iv) Electrical equipment; and (v) Chemicals and pharmaceuticals. The states specializing in these products (and are thus “exposed” too) are (i) Washington; (ii) Connecticut; (iii) Massachusetts; (iv)
Arizona; (v) Rhode Island; (vi) Oregon; and (vii) California. Arizona’s exposure, the authors note, comes from specializing in computers and electronics, as well “other transport equipment.”

Third, states that were more exposed to President Trump’s trade wars — in terms of imports (U.S. tariffs), exports (foreign retaliation), or total trade (both) — experienced less GDP growth and even less employment growth in 2018. The following chart shows the strong negative correlations between state‐​level import/​export exposure and these measures of economic activity: 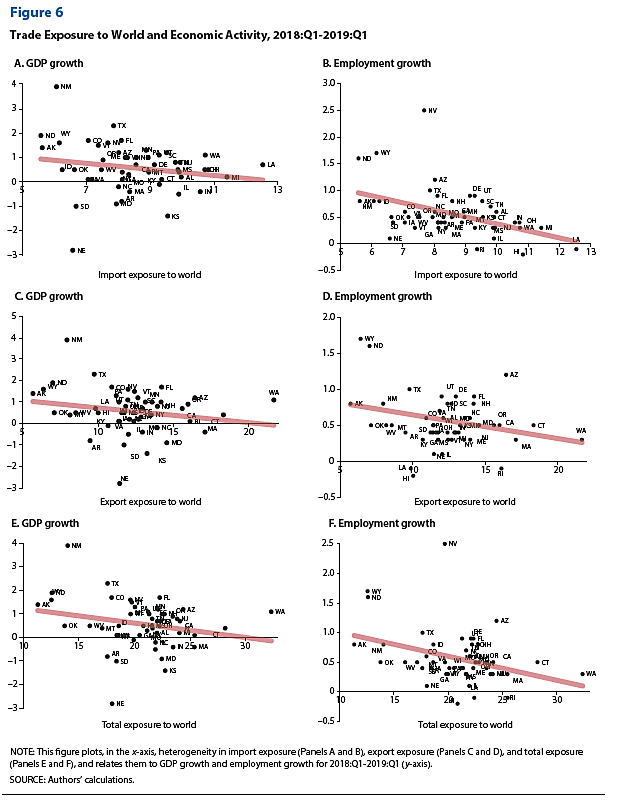 The authors therefore conclude (emphasis mine):

Fourth, a similar exercise for just the U.S.-China trade dispute, which only began in mid‐​2018 and accelerated after the period of review, again finds Michigan in the crosshairs and negative correlations between a state’s trade exposure and its economic performance. However, the correlations here are weaker overall.

Although the study’s authors are careful to note that these findings do not prove that President Trump’s trade wars caused these states’ weaker economic performance in 2018, they nevertheless state that the strong negative correlations between trade exposure and employment/​production suggest that the tariffs, retaliation, and related uncertainty played a significant role. Furthermore, their findings indicate that “the trade war initiated by the United States may have had a stronger impact on U.S. employment and production than what is found through the lenses of standard models of trade,” because those national models might mask the concentrated pain that U.S. tariffs and foreign retaliation inflicted on certain trade‐​exposed states.

One of those states is Michigan, which President Trump surprisingly won in 2016, has targeted again in 2020, but has trailed Democratic challenger Joe Biden by a wide margin since mid‐​2019. Trade‐​exposed battlegrounds Arizona and Ohio are closer, with Trump and Biden exchanging leads over the same period. Obviously, residents of these three states will cast their votes for a wide variety of reasons; culture, partisanship and personality may outweigh local economic performance; and COVID-19 has been a political and economic gamechanger this year. Nevertheless, the findings above — showing weaker jobs and output in trade‐​reliant swing states, and therefore indicating that Trump’s trade wars did significant economic harm in those states — should puncture the conventional wisdom that protectionism is a surefire political winner, even in the “Rust Belt.”