A Tale of Two Studies

A week ago, the White House released a report on the health consequences of global warming that was meant to supplement and reinforce the heath benefit claims made during the roll-out of new Environmental Protection Agency regulations aimed at reducing carbon dioxide emissions from existing power plants.

Those claims, which border on the bizarre, were met with a great deal of pushback—and deservingly so.

To say that we are disappointed with how the White House/EPA presents the data on heat-related mortality is an understatement. No matter how many times we point out—through official means, op-eds, blogs posts, etc.—that they are mishandling the data to such an extent that they present the opposite conclusion from that reached in the scientific literature, it never gets better.

In fact, it seems to be getting worse.

Below the jump, in its entirety, is the section on heat waves from the new White House report, The Health Impacts of Climate Change on Americans: 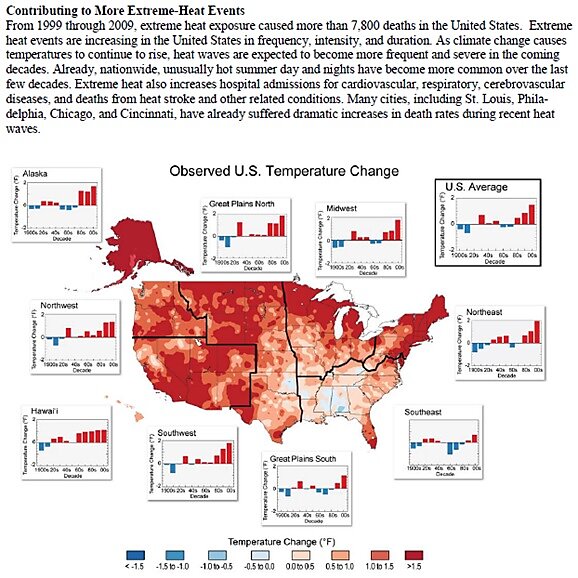 Notice that there is not a single study cited that links changes in heat waves to changes in heat-related mortality. Instead, it is strongly implied that increasing heat will lead to increasing deaths. We can’t think that any reader would reach the opposite conclusion given the White House discussion and presentation. And yet, that is precisely the case that scientific study after scientific study finds. Despite rising heat, fewer American’s die from heat-related causes (when properly adjusted, of course, for population increases and changes in age stricture).

But such information is nowhere to be found in the White House report. Instead, the section on extreme heat events shows a map of temperature trends across the United States and then goes on to say that extreme heat causes death, leading the readers to a false conclusion.

Here is a similar but more complete presentation from a scientific study looking at trends in temperature and trends in heat-related mortality across the United States. 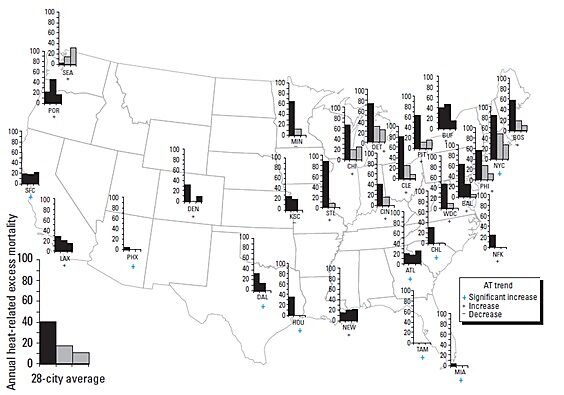 Figure 2. Annual heat-related mortality rates (excess deaths per standard million population on days in which the decadal-varying threshold apparent temperature (AT) is equaled or exceeded) by city and decade, and long-term trend in summer afternoon AT. Each histogram bar indicates a different decade: from left to right, 1960s–1970s, 1980–1989, and 1990–1998. Decades without histogram bars exhibit no threshold ATs and no heat-related mortality. Decades with gray bars have mortality rates that are statistically significantly different from the decades indicated by black bars. The average excess deaths across all 28 cities is shown at the lower left. AT trends are indicated beneath each city abbreviation (from Davis et al., 2003).

The map in Figure 2 shows trends in summer time apparent temperature (AT)—a combination of heat and humidity—indicated by the small symbol under each city and explained by the right-hand legend. It indicates basically the same thing as the White House map—that summer temperatures are on the rise across the country. But this map also superimposes the trends in heat-related mortality on the trends in temperature (the bar charts for each city).

What it shows is that annual heat-related mortality was on the decline across the United States from the mid-1960s through the late 1990s (the end of the data used in this study). More recent studies confirm that the downward trend in heat-related mortality has continued even in the face of rising temperature (can you say "adaptation"?).

This more complete presentation of the data tells the exact opposite story than the one that the White House (mis)leads you to believe.

You have to ask yourself why the White House finds it necessary to lead you away from the best science in order to drum up support for its energy policies (another example here).