Taiwan Is the Success Story, not China

Which nation is richer, Belarus or Luxembourg?

If you look at total economic output, you might be tempted to say Belarus. The GDP of Belarus, after all, is almost $72 billion while Luxembourg's GDP is less than $60 billion.

But that would be a preposterous answer since there are about 9.5 million people in Belarus compared to only about 540,000 folks in Luxembourg.

It should be obvious that what matters is per-capita GDP, and the residents of Luxembourg unambiguously enjoy far higher living standards than their cousins in Belarus.

This seems like an elementary point, but it has to be made because there have been a bunch of misleading stories about China "overtaking" the United States in economic output. Look, for instance, at these excerpts from a Bloomberg report.

China is poised to overtake the U.S. as the world’s biggest economy earlier than expected, possibly as soon as this year... The latest tally adds to the debate on how the world’s top two economic powers are progressing. Projecting growth rates from 2011 onwards suggests China’s size when measured in PPP may surpass the U.S. in 2014.

There are methodological issues with PPP data, some of which are acknowledged in the story, and there's also the challenge of whether Chinese numbers can be trusted.

But let's assume these are the right numbers. My response is "so what?"

I've previously written that the Chinese tiger is more akin to a paper tiger. But Mark Perry of the American Enterprise Institute put together a chart that is far more compelling than what I wrote. He looks at the per-capita numbers and shows that China is still way behind the United States.

To be blunt, Americans shouldn't worry about the myth of Chinese economic supremacy.

But that's not the main point of today's column.

Instead, I want to call attention to Taiwan. That jurisdiction doesn't get as much attention as Hong Kong and Singapore, but it's one of the world's success stories.

And if you compare Taiwan to China, as I've done in this chart, there's no question which jurisdiction deserves praise. 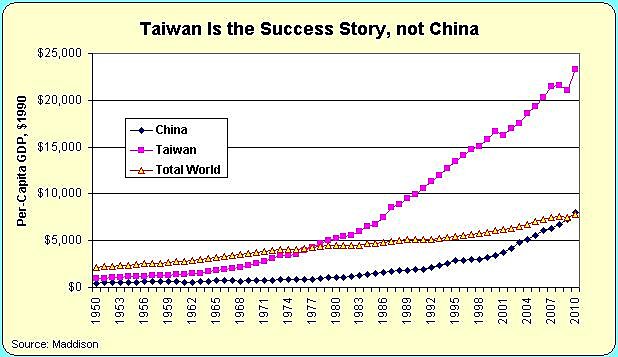 Yes, China has made big strides in recent decades thanks to reforms to ease the burden of government. But Taiwan is far above the world average while China has only recently reached that level (and only if you believe official Chinese numbers).

So why is there a big difference between China and Taiwan? Well, if you look at Economic Freedom of the World, you'll see that Taiwan ranks among the top-20 nations while China ranks only 123 out of 152 countries.

By the way, Taiwan has a relatively modest burden of government spending. The public sector only consumes about 21.5 percent of economic output. That's very good compared to other advanced nations.

Moreover, Taiwan is one of the nations that enjoyed considerable progress by adhering to Mitchell's Golden Rule. Between 2001 and 2006, total government spending didn't grow at all. 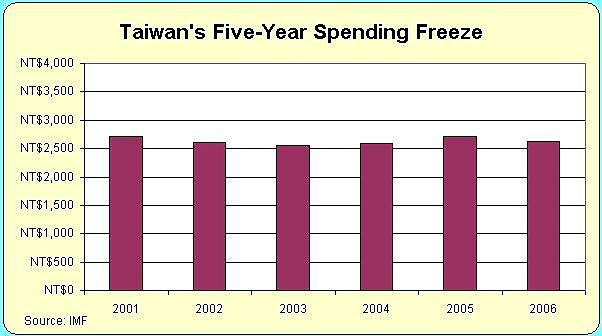 During this period of fiscal restraint, you won't be surprised to learn that the burden of government spending fell as a share of GDP.

And it should go without saying (but I'll say it anyhow) that because politicians addressed the underlying disease of government spending, that also enabled big progress is dealing with the symptom of government borrowing.

Look at what happened to spending and deficits between 2001 and 2006. 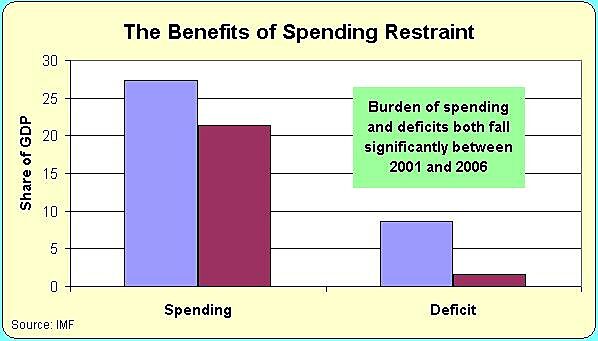 P.S. You probably didn't realize that it was possible to see dark humor in communist oppression.

P.P.S. But at least some communists in China seem to understand that the welfare state is a very bad idea.