In May 2019, the Swedish research institute V‐​Dem published its annual Democracy report. It concluded that Taiwan is subjected to more foreign disinformation than any other country in the world. Most of it, though not all, originates in China. However, Beijing’s comprehensive information operation against Taiwan failed spectacularly in the recent elections of the president and the legislative body. One year ago, China’s favored candidate for Taiwan’s presidency was leading in the polls by a comfortable 20 points margin. Last month he was defeated by the incumbent president from the pro‐​independence party DPP, (The Democratic Progressive Party) losing by 20 percent. The DPP, contrary to some predictions, won an absolute majority in parliament as well.

And not only did Beijing’s favored candidate and party lose, Chinese attempts to sow division and political chaos failed as well. Despite their best efforts, they were unable to undermine the democratic institutions that distinguish Taiwan from the unfree. What happened?

Two external factors influenced the outcome. First, a speech by China’s President Xi Jinping in January 2019 was perceived by the Taiwanese as a threat to their de facto independence. As usual, Xi insisted that Taiwan was part of China, and added that Beijing would not renounce the use of force, reserving its right to use all means necessary to prevent Taiwan from gaining de jure independence. Second, demonstrations in Hong Kong made it clear to voters in Taiwan that the Chinese approach to Hong Kong and Taiwan, the ”one country two systems” formula, is a fiction. One grassroots activist in Taipei deemed it “an indisputable piece of disinformation”.

Apart from the external factors, it’s worth pondering whether domestic factors played a part in the failure of the Chinese information operation. This is relevant for any liberal democracy trying to cope with the threat from disinformation.

In the run‐​up to Taiwan’s January 12 elections, I spent five days visiting the country, talking to politicians, think tanks and visiting Facebook’s election war room. What did I find?

As a European, I am used to tired, timid liberal democracies constantly on the lookout for things to ban and liberties to limit. In contrast, I was struck by the visible enthusiasm among Taiwanese for civil society and democratic government.

This is reflected in surveys measuring freedom. The Human Freedom Index, a measure that encompasses personal, civil, and economic freedom, ranks Taiwan as number 19 in the world ahead of Japan and South Korea in Asia, and France, Spain, and Italy in Europe. During the last decade, Taiwan has grown more free, rising from 42nd to 19th place, while freedom recedes in other parts of the democratic world. (See graph below). 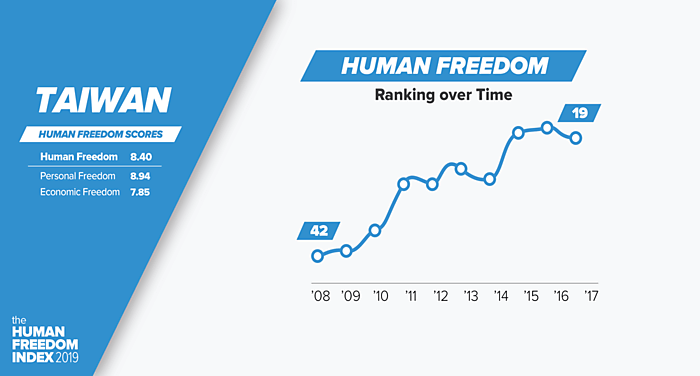 On election day I visited Facebook’s ”War Room” in Taipei for an off the record briefing. In Taiwan, Facebook has 15 million daily users of its service, a huge proportion of the country’s 23 million residents. Post‐​election reports from independent observers have confirmed that Facebook, in cooperation with the local governments and civil society fact‐​checkers, sharply limited outside interference and deliberate attempts to spread false information.

Kharis Templeman, a leading expert on Taiwan, democratization, and election management and a research scholar at Stanford University, applauded Facebook’s engagement. In an email exchange, he said that he was ”impressed with Facebook’s active role in shutting down problematic fan pages (mostly for the KMT candidate Han Kuo‐​yu) and devolving fact‐​checking authority to local NGO groups such as the Taiwan FactCheck Center to flag and rebut false stories being distributed on their platform.”

Templeman added: “As a consequence, Facebook itself did not appear to be a significant medium for spreading disinformation during this campaign, and I hope they use this experience as a building block for elections in other countries, particularly the US 2020 presidential campaign.”

Taiwan’s government requires state agencies to rebut false claims related to their areas of responsibility on social media and the internet within two hours. The rebuttal must be communicated in 200 characters or less, and in two different modalities. It could be a picture and a short text and a video. The point is not just to push back against false information, but to do it in a way that makes sure the rebuttals go viral before disinformation packages reach their audience. Humor is also an important element in the government’s strategy, countering and minimizing manufactured outrage.

This assertive government policy of rebutting claims might sound controversial to people devoted to the First Amendment and the fundamental principle of viewpoint neutrality. However, the Taiwanese effort is not mandated by government. The government seeks to work out norms in cooperation with civil society actors and fact‐​checking groups outside government. There are challenges to come. In some cases, it may be difficult to distinguish local partisanship from disinformation promoted from outside Taiwan. The effort to prevent interference in the nation’s election could easily become a typical case of censorship.

In spite of an existential threat to democracy and national independence, Taiwan hasn’t followed the militant democratic path paved by many European countries. Instead, Taiwan is managing the threat by trying to be everything that China isn’t: radically transparent, tolerant of differences and dissent, democratic and free.

Here is what Taiwan’s digital minister Audrey Tang had to say about the Chinese threat and her preferred way of confronting it when I asked her whether Taiwan’s democracy was in crisis:

“No. We define the character of our democracy and the way we use technology as the opposite of what China is doing. I talk about radical transparency. It means that the state has to operate in an open and transparent way to the public. In China, the same word means exactly the opposite, namely state surveillance, i.e. making the people of China transparent to the state. It’s the same with concepts like social credit and public‐​private partnerships, we use similar words, but they convey opposite meanings.”

Tang’s starting point is that the government has to trust the people while citizens by definition should be wary of government.

“Only by radically trusting the people can we figure out co‐​governance possibilities with them. At the same time, I don’t think people should trust the government. Citizens’ trust in government should be proportional to how much the government trusts the citizens.”

Martin Gurri has identified the widening gap and distrust between elites and the societies they have been entrusted to run as one cause of what he calls the “Revolt of the Public”. Gurri is skeptical that existing elites can fix the problem and regain some of their lost trust. They might, however, learn a thing or two from Tang and the Taiwanese government.

First, in a quickly changing world regular referenda have been introduced. The results are implemented for a two‐​year period which gives more flexibility and opportunities to experiment and roll them back if they don’t work as expected.

Second, the government organizes regular Presidential Hackathons aimed at improving government services. Competing teams are invited to work out solutions – to quote from last year’s hackathon – to problems like “open governance”, “cross‐​domain cooperation”, industry development”, and “national sustainability”. The winner’s project becomes public policy within a year. This is a way of crowd‐​sourcing agenda‐​setting and law.

Third, Tang emphasizes the sovereignty of the individual and respect for democratic processes as the most effective way of protecting Taiwan’s independence. She explains:

“The people of Taiwan are not so firmly entrenched in the idea of Westphalian sovereignty. Everybody can agree that nobody agrees on what Taiwan means. The only thing we can agree on is the democratic process. It’s easy for disinformation to get through to a faction of the population but like biodiversity it also makes it harder for disinformation to overtake a majority of the population.”

Finally, to prepare new generations for the digital world, the government has introduced a new curriculum in schools. It focuses on media competence instead of media literacy. The concept of media literacy implies that people are just readers, viewers, consumers of content, not producers. Tang stresses that the government perceives every citizen as a potential media producer, not just a consumer.

“Children have to learn that they are data producers, media producers. Only this way will they be able to truly understand what framing and other effects mean and become contributors to collaborative fact‐​checking. In the long run this is the real way to counter disinformation.”

In his 1996 international bestseller The Clash of Civilizations And the Remaking of World, Samuel Huntington predicted that “early in the twenty‐​first century it seems likely that through coercion, accommodation, or most likely a mixture of both Taiwan will become more closely integrated with mainland China.” This prediction hasn’t materialized, and indeed, quite the opposite has happened. China is growing more authoritarian while Taiwan seems to have left its authoritarian past behind to become a more mature democracy.

In our email exchange, Stanford’s Kharis Templeman pointed to the fact that “The Chinese authoritarian political model has never held much appeal to Taiwanese, and its image has not improved much as they have been able to travel to the mainland and learn more in person about how it functions.”

Templeman thinks that “Taiwan’s democracy is in some ways uniquely well‐​situated to survive a disinformation campaign from the PRC, precisely because it has been the target of such campaigns for so long, and because so much of the political system is acutely attuned to the China issue and not very susceptible to attempts to change views on this fundamental cleavage.”

Templeman concludes that ”the commitment to democracy among the younger generations in Taiwan has gone hand in hand with the rising support for a separate Taiwanese identity and de facto independence, and, as you probably observed, the DPP in particular tries every election to portray itself as the true guardian of democratic values (as opposed to the formerly authoritarian KMT) as part of a broader argument about their superior commitment to a free and democratic way of life for Taiwan’s people. The intense partisanship that divides the pan‐​green (DPP) and pan‐​blue (KMT) camps helps anchor the party system, but it also increases the political sensitivity to any issues involving the cross‐​Strait relationship. There are some significant problems that come with that political polarization, but there are also some benefits. One benefit is that, much like a patient who has grown up exposed to a virus from an early age, a large portion of the electorate in Taiwan is inoculated against outside efforts to undermine support for a pro‐​independence position and bolster support for pro‐​unification ones.”

Templeman’s analysis is backed up by opinion polls conducted on a regular basis by the National Chengchi University. In 1992 just 17,6 percent of the population of Taiwan identified as Taiwanese while a majority — 46,4 percent — described themselves as Chinese. Back then around 25 percent said they were both Chinese and Taiwanese. In 2019 a dramatic change had taken place. Now 56.9 percent identify as Taiwanese, while only 3.6 percent say they are Chinese, and 36.5 percent describe themselves as both Taiwanese and Chinese.

This development is testimony to a simple though important fact: cultures are not stable, unchanging entities, and no nation, be the US, China or Taiwan is by nature endowed with a genetic disposition toward dictatorship or democracy. Culture is something people acquire, not something they are born with. Both in Taiwan and in China more than 90 percent of the population are ethnic Han Chinese, but the countries have developed very different political cultures, and the difference seems to be growing.