Survey: 58% of Americans Favor Iran Nuclear Agreement, but Worry about Its Efficacy 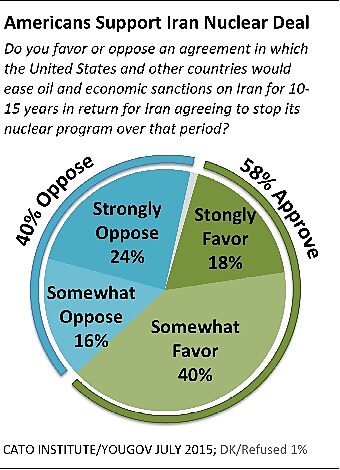 A new Cato Institute/YouGov poll finds a solid majority—58%—of Americans supports the main components of the Iran nuclear deal, in which the United States and other countries would ease oil and economic sanctions on Iran for 10-15 years in return for Iran agreeing to stop its nuclear program over that period. Forty percent (40%) oppose such a deal.

Americans also prefer Congress to allow such a deal to go forward (53%) rather than block the agreement (46%). Support declines slightly when the deal is described as an agreement between the “Obama administration and Iran.”

Despite support for the deal, Americans remain skeptical it will stop Iran’s nuclear program. Fifty-two percent (52%) of Americans say the agreement is “unlikely” to “stop Iran from developing nuclear weapons,” including 32% who say it’s “extremely unlikely.” Conversely, 46% believe the deal is likely to achieve its primary goal.

However, Americans are more optimistic the deal will delay Iran from developing nuclear weapons. The poll found 51% of Americans think the deal will likely “delay” Iran’s nuclear development while 47% disagree. 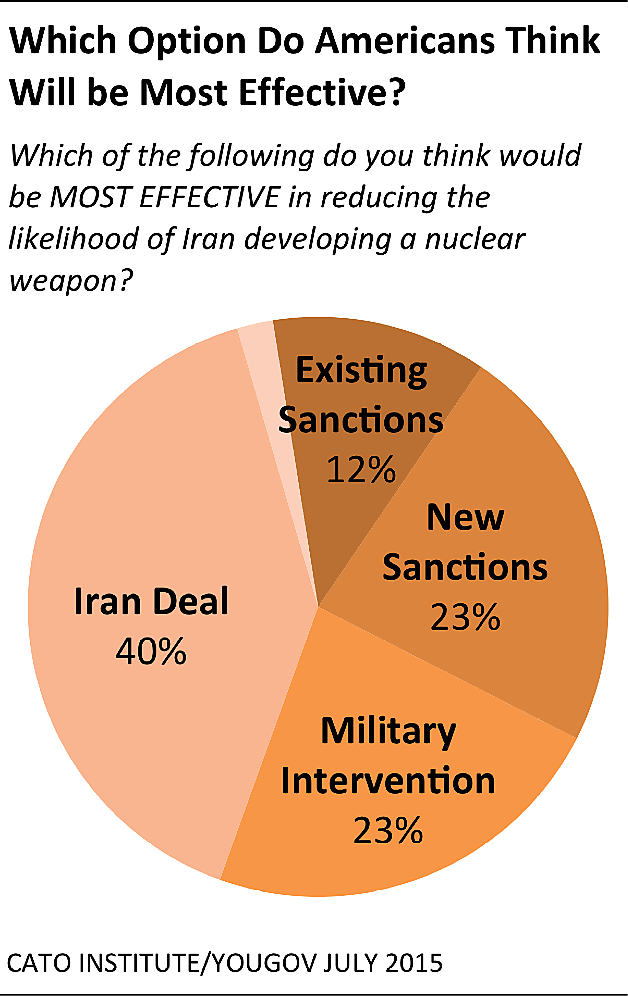 The survey also offered Americans an opportunity to select which one of several policy options would be “most effective” in reducing the likelihood Iran develops nuclear weapons. Doing so found a plurality –40%— think the Iran nuclear agreement would be more effective than taking military action against Iran’s nuclear facilities (23%), imposing new economic sanctions against Iran (23%) or continuing existing sanctions against Iran (12%).

Ultimately, 63% of Americans say it would be a “disaster” if Iran developed nuclear capabilities while 32% say the problem could be managed and 5% say it wouldn’t be a problem. Nevertheless, Americans tend to have confidence that the Iran nuclear agreement may be the next best step toward reducing that possibility.

Partisanship polarizes support for the Iran nuclear agreement and the perceived threat. 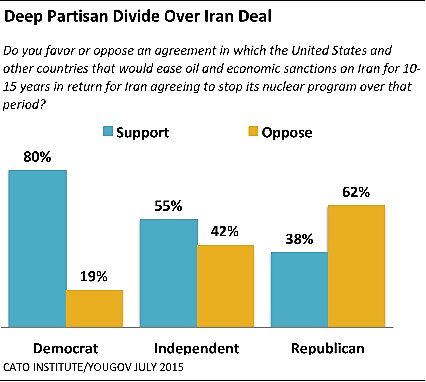 Young Americans are also far more supportive of the deal, more likely to believe in its efficacy and less likely to fear Iran obtaining a nuclear weapon compared to older Americans.

Fully 68% of Americans 18-29 support the Iran nuclear deal compared to 50% of those over 65. Furthermore, 6 in 10 millennials say the agreement will stop Iran’s nuclear development compared to only 3 in 10 seniors. 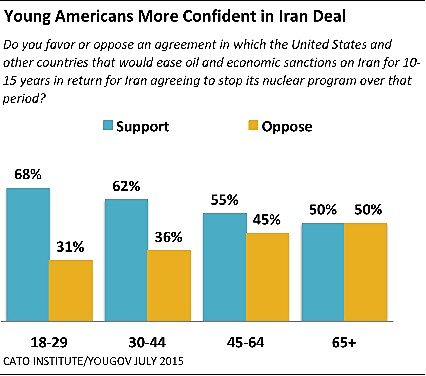 Ultimately, young Americans are simply less concerned if Iran gains nuclear capabilities. While 76% of seniors say such an outcome would be a disaster only 48% of 18-29 year olds agree. Instead, 51% of millennials say Iranian nuclear capabilities would be a “problem that can be managed” (39%) or “not a problem at all” (12%). These results comport with findings from Trevor Thrall and Eric Goepner’s recent study of millennial attitudes on foreign policy. 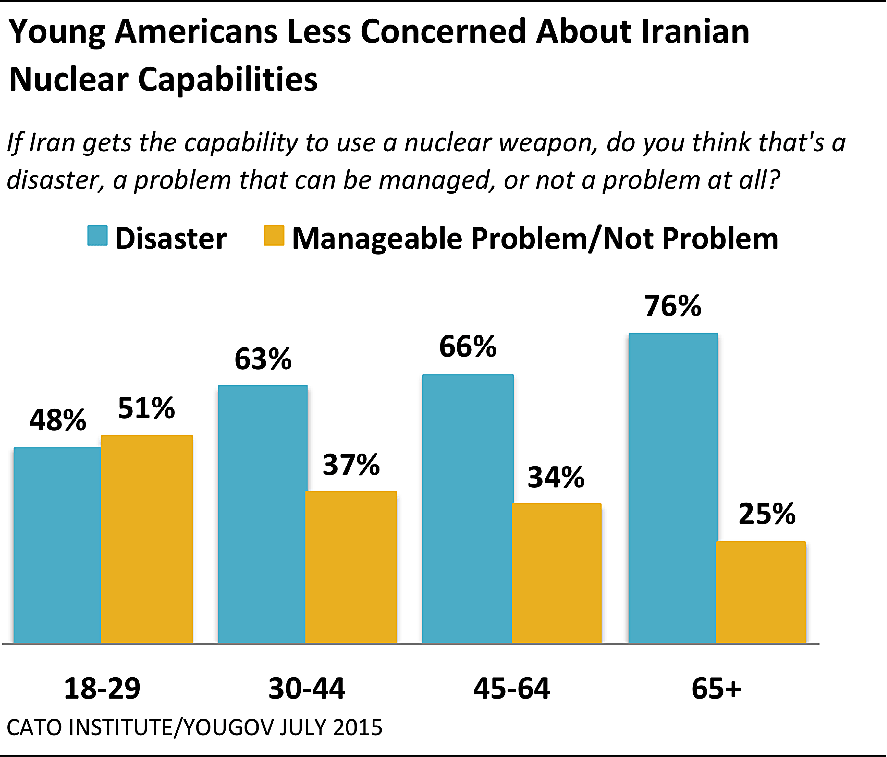 Religiosity plays a role as well: the more someone attends religious services the more they believe that economic sanctions or military intervention will best prevent Iran from obtaining nuclear capabilities and the less likely they are to believe that the Iran nuclear agreement will work.

For instance, among those who often attend religious services, 40% think economic sanctions will best reduce Iranian nuclear development followed by 30% who say the nuclear agreement and 28% who say military intervention. Conversely among those who never attend religious services 47% think the Iran nuclear agreement will be most effective, followed by 30% who think economic sanctions and 19% who think military intervention will work best.

Similarly, Protestants are about 20 points less likely than the religiously unaffiliated to think the Iranian nuclear agreement (28% v. 49%) will work better than economic sanctions or military intervention in reducing Iranian nuclear capabilities.

The Cato Institute/YouGov Poll of 1,004 adults was conducted July 14-16, 2015, using a sample drawn from YouGov’s online panel, which is designed to be representative of the U. S. population. YouGov uses a method called Active Sampling to conduct its surveys, and restrictions are put in place to ensure that only the people selected and contacted by YouGov are allowed to participate. The margin of sampling error for all respondents is plus or minus 4.3 percentage points. Toplines (.pdf) results can be found here, crosstabs (.xls) can be found here.

Correction: A previous version of this post said YouGov uses a probability-based online panel. This has been corrected to state that YouGov uses a method called Active Sampling to conduct its surveys.

Sign up for future releases of Cato Public Opinion Insights: