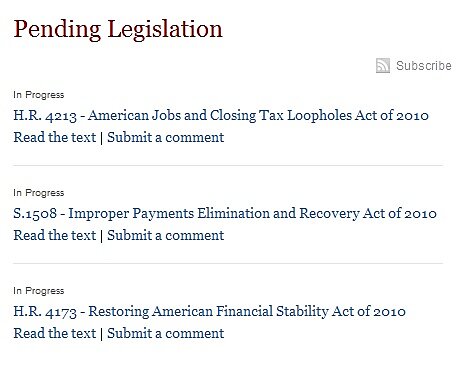 Today, three bills that have not been presented to the president are posted on White​house​.gov as if they are ready for him to sign. (One of them, S. 1508, has been cleared for the president, but not presented. The other two haven’t seen final votes in Congress.)


(Update: Later this morning, a fourth bill was added. H.R. 5502 has been passed by the House and Senate and cleared for the White House, but not presented, according to the Thomas legislative reporting system. It may be that the bill has been presented, but the fact is not yet reported on Thomas. Similarly, H.R. 4173 did have its final vote in Congress yesterday—it was my error to say otherwise—but its presentment is not indicated on Thomas. Based on that, I presume it has not been presented, but I cannot be sure. These facts—ahem—“cloud” this critique of White​house​.gov practice.)


They have the notation “In Progress” next to them rather than the date on which they were posted. What that means is lost on me, and I’m a lawyer with years of experience on Capitol Hill and more than a decade in public policy. Where does this leave Joe and Jane Six‐​Pack?


Transparency is about making public policy accessible to ordinary people so they can oversee their government. This doesn’t help.


Overall, the news remains good. The White House has created an institutional practice of posting bills online for five days before the president signs them, as he promised he would do. Perhaps it’s because we’re coming so close to full implementation of an important transparency promise that it’s disappointing to see this odd detour into posting bills that are not ready for the president’s signature.