If we want to avoid the kind of Greek-style fiscal collapse implied by this BIS and OECD data, we need some external force to limit the tendency of politicians to over-tax and over-spend.

That’s why I’m a big advocate of tax competition, fiscal sovereignty, and financial privacy (read Pierre Bessard and Allister Heath to understand why these issues are critical).

Simply stated, I want people to have the freedom to benefit from better tax policy in other jurisdictions, especially since that penalizes governments that get too greedy.

I’m currently surrounded by hundreds of people who share my views since I’m in Prague at a meeting of the Mont Pelerin Society. And I’m particularly happy since Professor Lars Feld of the University of Freiburg presented a paper yesterday on “Redistribution through public budgets: Who pays, who receives, and what effects do political institutions have?”

His research produced all sorts of interesting results, but I was drawn to his estimates on how tax competition and fiscal decentralization are an effective means of restraining bad fiscal policy.

Here are some findings from the study, which was co-authored with Jan Schnellenbach of the University of Heidelberg.

The paper includes a bunch of empirical results that are too arcane to reproduce here, but they basically show that the welfare state is difficult to maintain if taxpayers have the ability to vote with their feet.

Or perhaps the better way to interpret the data is that fiscal competition makes it difficult for governments to expand the welfare state to dangerous levels. In other words, it is a way of protecting governments from the worst impulses of their politicians.

I can’t resist sharing one additional bit of information from the Feld-Schnellenbach paper. They compare redistribution in several nations. As you can see in the table reproduced below, the United States and Switzerland benefit from having the lowest levels of overall redistribution (circled in red).

Interestingly, Switzerland definitely has significantly more genuine federalism than any other nation, so you won’t be surprised to see that Switzerland is far and away the nation with the lowest level of tax redistribution (circled in blue). 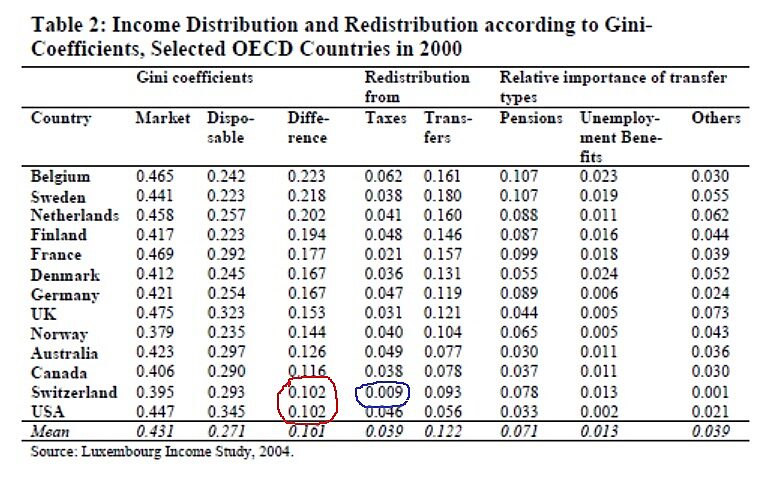 One clear example of Switzerland’s sensible approach is that voters overwhelmingly rejected a 2010 referendum that would have imposed a minimum federal tax rate of 22 percent on incomes above 250,000 Swiss Francs (about $262,000 U.S. dollars). And the Swiss also have a spending cap that has reduced the burden of government spending while most other nations have moved in the wrong direction.

While there are some things about Switzerland I don’t like, its political institutions are a good role model. And since good institutions promote good policy (one of the hypotheses in the Feld-Schnellenbach paper) and good policy leads to more prosperity, you won’t be surprised to learn that Swiss living standards now exceed those in the United States. And they’re the highest-ranked nation in the World Economic Forum’s Global Competitiveness Report.