Stopping the President from Going Nuclear

Add yesterday’s rage‐​spasm of a press conference to the growing list of reasons reasonable people are inclined to worry about Donald Trump’s proximity to nuclear weapons. In addition to what it suggested about Trump’s moral compass (“Very fine people” aren’t attracted to posters that look like this), his performance also highlighted questions about the judgment, temperament, and impulse control of the man entrusted with the world’s most fearsome arsenal. 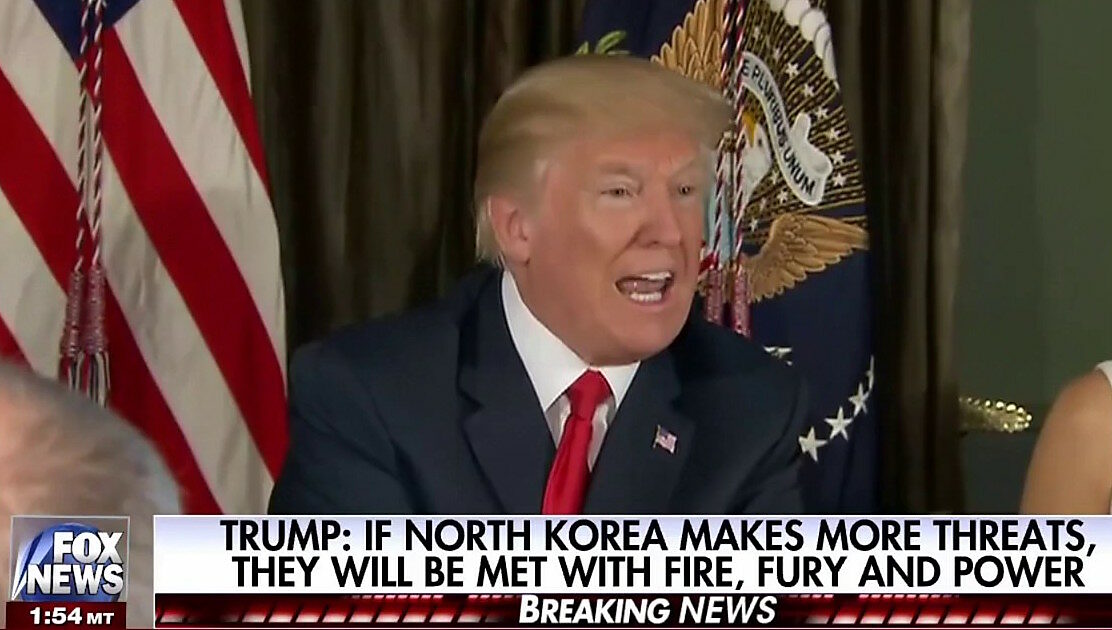 Last week, recall, Trump threatened North Korea with nuclear annihilation: “North Korea best not make any more threats to the United States…. They will be met with fire, fury and frankly power the likes of which this world has never seen.” “Fire and fury” was ad‐​libbed, apparently, but on Thursday, he upped the ante: “if anything, that statement may not be tough enough.” (For a cooldown lap, on Friday, Trump warned he was “not going to rule out a military option” in Venezuela.)


When you’re faced with a president who has weekly meltdowns on Twitter and likes to “wing it” with nuclear threats, it tends to concentrate the mind painfully on the legal and practical restraints to presidential power. Does the president have the constitutional power to launch a nuclear first strike on a country for “mak[ing] threats”? If he decides to act on that impulse, is there anything Congress can do to stop him?


The first question’s the easy one: the answer is no. In the absence of an imminent attack, the president has no constitutional power to rain down “fire and fury” on North Korea. As Ilya Somin explains here, “the Constitution very clearly reserves to Congress the power to start a war.”


The president retains some independent power to act defensively: to “repel and not to commence war” or “repel sudden attacks,” as Madison’s notes from the Convention put it. We can argue about whether a second strike—launch under attack—is included within this power. But the constitutional power to “repel sudden attacks” doesn’t include the power to launch them.


The whole point, as James Wilson told the Pennsylvania ratifying convention in 1787, was to design a “system [that] will not hurry us into war…. It will not be in the power of a single man… to involve us in such distress; for the important power in declaring war is vested in the legislature at large.”


Is there anything Congress can do to prevent a trigger‐​happy president from hurrying us into nuclear war? Congressman Ted Lieu has drafted a bill that he hopes will do just that. HR 669, the “Restricting First Use of Nuclear Weapons Act,” provides that “The President may not use the Armed Forces of the United States to conduct a first‐​use nuclear strike unless such strike is conducted pursuant to a declaration of war by Congress that expressly authorizes such strike.”


Someone from the John Yoo school of constitutionalism might argue that the law encroaches on presidential prerogatives by “micromanaging” the means available to protect national security. But Lieu’s bill is clearly constitutional: if Congress can tell the president not to use ground combat troops in a particular war, it has the legal authority to bar him from launching an unauthorized nuclear first strike.


Would Lieu’s bill work, though? Here, I have my doubts.

In principle, the military is not supposed to obey an illegal order by the president, but in practice, they follow the chain of command. In all but the most extreme cases—e.g., orders to commit war crimes—it’s good that they do. Civilian control of the military is a core principle of free government, and it’s almost always better preserved by erring on the side of military obedience to the CINC, even where his authority may be in doubt.


As a practical matter, though, that means that simply passing a law won’t necessarily restrain presidential warmaking. Our experience with the War Powers Resolution makes that clear. Put aside the question of how the law applies to limited, short‐​term military operations: if the WPR does anything, it bars the continuation of hostilities beyond 60 days unless Congress has declared war or passed a specific statutory authorization for war. In fact, “the view that the 60‐​day clock is constitutional has remained consistent executive branch law throughout the Reagan, Bush‐​Quayle, Clinton, Bush‐​Cheney, and Obama administrations.” But twice in recent decades, presidents have blown by that limit: first in Kosovo in 1999; second in Libya in 2011. Each time, the clear language of the law didn’t matter: the president ordered the military to keep bombing, and they did.


Why would Lieu’s “no‐​first‐​use act” fare any differently? The nuclear launch process is built for speed—designed to give the president the power to launch a second strike in mere minutes, while enemy missiles are still in the air. That also makes it difficult to stop a president who decides to launch first. The guys in the bunkers who turn the keys have surely been vetted to weed out “question authority” types. In the ‘70s, there was actually an Air Force major who was training for the job, and when he asked, “how can I know that an order I receive to launch my missiles came from a sane president?”—that was the end of his career.


Trump can’t literally “push the button” and have Pyongyang obliterated. But once the order is authenticated with the codes on the “biscuit,” and it goes out from the Pentagon, it’s likely already too late.


The one effect Lieu’s bill might have, and this is speculative, is it might embolden the president’s secretary of defense or the chairman of the Joint Chiefs to put up roadblocks before the order is transmitted. (I say “or the Chairman of the Joint Chiefs” because it appears that the president has the option to issue the order without going through the Secretary of Defense).


There’s a story about Richard Nixon, whose behavior during the Final Days—frequently drunk and raving—made people worry about his access to nukes. In a meeting with congressmen, Nixon blurted out that: “I can go in my office and pick up a telephone, and in 25 minutes, millions of people will be dead.” One of the attendees, Senator Alan Cranston called then‐​Secretary of Defense James Schlesinger, worried about “the need for keeping a berserk president from plunging us into a holocaust.” Schlesinger apparently told the top military brass that if the president issued any unusual orders, they needed to check with him first.


The practical effect Lieu’s bill could have, in the unlikely event it passed, might be to buttress a future Schlesinger. By giving the Secretary of Defense or the Chairman added cover to get in the way of a decision he knows to be crazy, it could slow or stop the delivery of the order from the Pentagon to the launch officers. For that reason alone, it’s worth considering. But when you’re depending on a guy whose nickname is “Mad Dog” to preserve sanity within the executive branch, you’re already in a pretty dangerous place.