Friday’s disappointing jobs report reminds us that we are still in a very slow recovery from the 2007 recession. Not only were far fewer jobs created in September than economists predicted, the estimates for July and August were revised downward. And the size of the total workforce slipped to 62.4 percent of the population, the lowest level since 1977.


The Minneapolis Federal Reserve Bank has a handy tool for monitoring the depressing news, allowing you to compare this recovery to past recoveries since World War II. Output (GDP) is recovering more slowly than in past recoveries, along with employment: 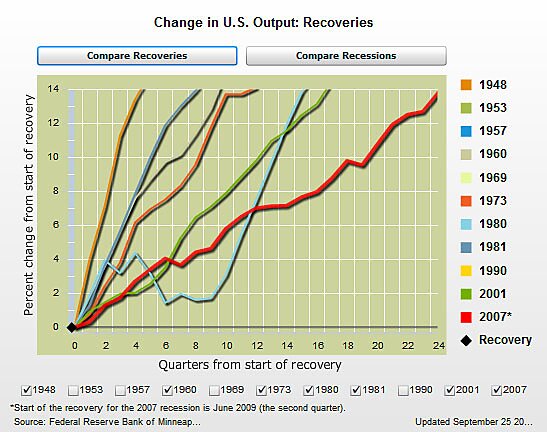 Why is the recovery so slow? John Cochrane of the Hoover Institution examined that question in the Wall Street Journal a year ago. Here’s part of his answer:

Where, instead, are the problems? John Taylor, Stanford’s Nick Bloom and Chicago Booth’s Steve Davis see the uncertainty induced by seat‐​of‐​the‐​pants policy at fault. Who wants to hire, lend or invest when the next stroke of the presidential pen or Justice Department witch hunt can undo all the hard work? Ed Prescott emphasizes large distorting taxes and intrusive regulations. The University of Chicago’s Casey Mulligan deconstructs the unintended disincentives of social programs. And so forth. These problems did not cause the recession. But they are worse now, and they can impede recovery and retard growth.