This month, Attorney General Jeff Sessions announced that the Department of Justice would institute a “zero‐​tolerance policy” along the Southwest border, stating that he wants to criminally prosecute 100 percent of all illegal entries. Sessions claimed that “a crisis has erupted at our Southwest Border that necessitates an escalated effort to prosecute those who choose to illegally cross our border.” Yet the “crisis” amounts to a flow of illegal immigration 96 percent lower than the level in the 1980s and lower than just two years ago.

Because we cannot know how many border crossers actually evade capture, the best measure of illegal entries is the number of crossers that Border Patrol apprehends. Of course, more agents results in more apprehensions for the entire Border Patrol, which is why it is important to control for the effect of enforcement, focusing on the number each agent arrests. More attempted crossings generally translate into more apprehensions for the average agent. Figure 1 presents the average number of monthly apprehensions along the Southwest border per Border Patrol agent. The average apprehensions per agent in a month in Fiscal Year 2018 was less than 2—which is 95.5 percent lower than the rate in the peak year of 1986. 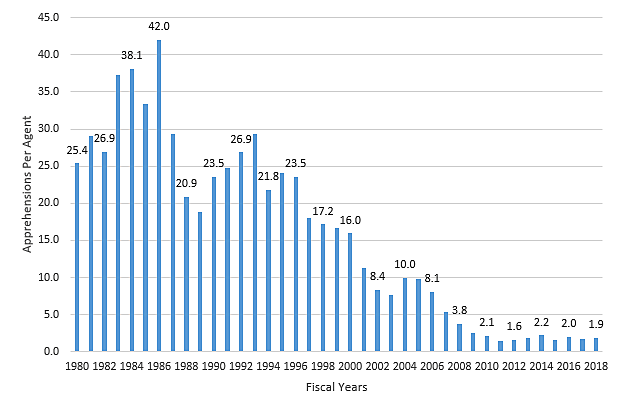 The 1.9 average monthly apprehension rate for each agent so far for 2018 is exactly the average rate for the last decade. How does the Department of Justice find a crisis in these figures? It states, “the Department of Homeland Security reported a 203 percent increase in illegal border crossings from March 2017 to March 2018.”

To show why comparing one month in 2018 to the same month in 2017 is misleading, Figure 2 compares the first six months of each fiscal year since 2010. I bolded FY 2018 in black just so that it is visible among the thicket of near parallel lines. It is obvious that FY 2017 (orange), not 2018, is the abnormal year. Every other year followed the same pattern: lower apprehensions in the fall and winter, higher apprehensions in the spring and summer. 2017 broke this pattern. People came in higher numbers in the fall and winter of FY 2017—i.e. October 2016 to February 2017—while fewer came in the spring of 2017. Now the pattern has simply returned to normal. 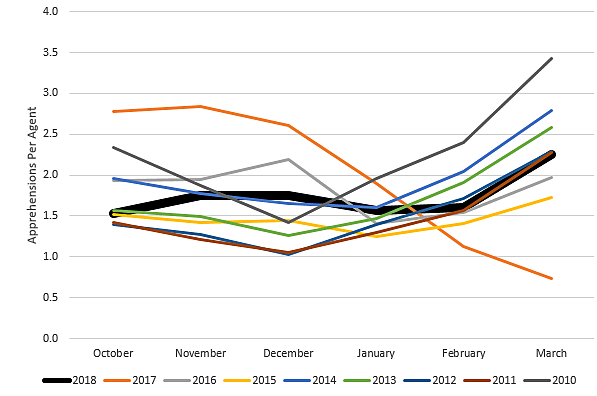 This fits with the hypothesis that I proposed last August: that Trump’s campaign rhetoric had a major effect on border crossings. People moved up their travel plans to hedge against the possibility that President Trump would institute major reforms to border security. In other words, Trump caused an increase in illegal immigration starting before the election and a decrease after his inauguration, but no net change in total arrivals. I predicted that the prior trend would return once migrants and asylum seekers realized that the hype was overblown. This is exactly what has happened.

Sessions should not use the anomalous months of 2017 to argue that the border crossings in 2018 are at “crisis” levels. There is simply no evidence to support this view.