Still Looking for the Anti‐​Tea Party

Covering the budget fight and President Obama's tepid and misleading budget proposal, NPR's Scott Horsley reported this morning on opposition from the left:

We saw sort of the counterweight to the Tea Party on the right yesterday ... protesting  outside the White House.

Big rally against budget constraints, eh? Like the Tea Party rallies such as this one? 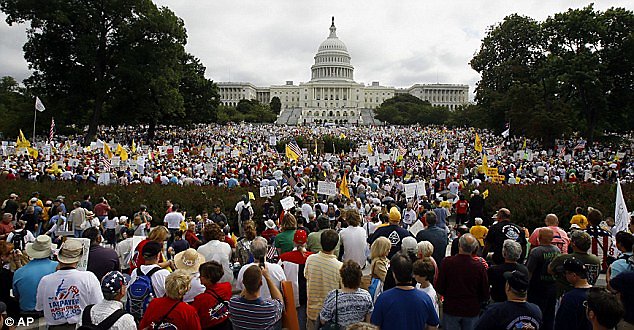 Well, not exactly like the Tea Party rallies. According to various news stories, the rally was supported by numerous groups, including the AFL-CIO, MoveOn.org, the National Organization for Women, Progressive Change Campaign Committee, Democracy for America, and National Committee to Preserve Social Security and Medicare. Speakers included Sen. Bernie Sanders, liberal activist (and brother of former presidential candidate Howard Dean) Jim Dean, and at least two members of Congress.

And here's how the AP reported the results:

Liberal lawmakers from Congress and a coalition of like-minded groups rallied outside the White House on Tuesday, voicing frustration at the Democratic president they say has let them down by proposing cuts to Medicare and Social Security.

"If they vote to cut Social Security, they may not be returning to Washington," Sanders told about 100 people who gathered with signs that read "No Chained CPI" and "We earned our Social Security."

I'm not sure the president should have too much confidence in this "counterweight to the Tea Party."