The all-too-early death of Steve Jobs was reported on the day that President Obama made another defense of his so-called jobs bill. Which one actually benefited (or would benefit) Americans and the American economy? Lots of people have talked about the way Steve Jobs changed technology, changed business, changed the world. And I trust there'll be no more churlish complaints about his alleged lack of philanthropy. As Dan Pallotta definitively pointed out,

What a loss to humanity it would have been if Jobs had dedicated the last 25 years of his life to figuring out how to give his billions away, instead of doing what he does best.... [T]he world has no greater philanthropist than Steve Jobs. If ever a man contributed to humanity, here he is.

Two years ago Portfolio magazine did a great graphic on "The Steve Jobs Economy," trying to assess just how much value he himself had created for the economy. The conclusion: Jobs's personal wealth at the time was estimated at $5.7 billion. But he was generating $30 billion a year in revenue for Apple, its partners, and its competitors (who were spurred to get better). Here's the analysis (sorry for the imperfect tear sheet): 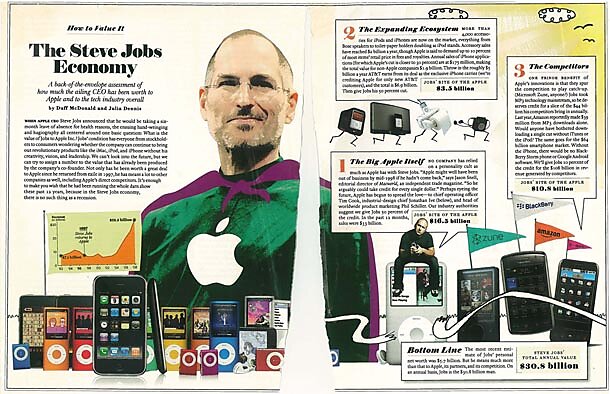 According to Portfolio and the experts it consulted, Jobs was producing $30 billion a year in value for various companies. And of course that means that consumers believed they were getting at least that much value themselves, or they wouldn't buy the products. That's a wealth creator. And that number pales in comparison to this one: After returning to Apple in 1997, Jobs took the total value of the company from about $2 billion to $350 billion.

How much value is the Post Office creating this year? Or Amtrak? Or Solyndra? And if you point out that the Post Office does create value for its customers even though it loses money every year, I would ask, how much more value might its competitors create, if it allowed competition?

Instead of another bag of taxpayers' money for state and local governments and politically favored businesses, a real jobs program would encourage the next Steve Jobs to create value. What would that involve? Keep taxes on investment and creativity low. Reduce the national debt and its threat of huge tax hikes to come. Ease the burdens of regulation, especially regulations that make it difficult to open a business, hire and keep the best employees, and develop new ideas. Open the huge, stagnant postal and schooling businesses to competition, innovation, and entrepreneurship. Repeal some of the licensing laws that now afflict 1,100 occupations. Renew progress toward free trade. Make it smart for businesses to invest their time, money, and brainpower in productive activity, not lobbying.