State Tax Increases on the Rise

The headline from State​line​.org’s top story today reads, “State budget gaps top $200 billion; fee, tax hikes in the works.” But as Chris Edwards noted back in February, these so‐​called “budget gaps” are mainly fiction. Put simply, previous revenue forecasts overstated the amount of money that would be coming into state coffers. Now that revenues are drying up because of the slow economy, state politicians can’t spend the amount of money they intended.


For individuals and businesses, the economic downturn and resulting financial crimp means less spending and more prudence. For politicians and those living at the expense of taxpayers, it means raising taxes to keep the spending spigots turned on. As the table below shows, total state spending has increased at an excessive pace this decade: 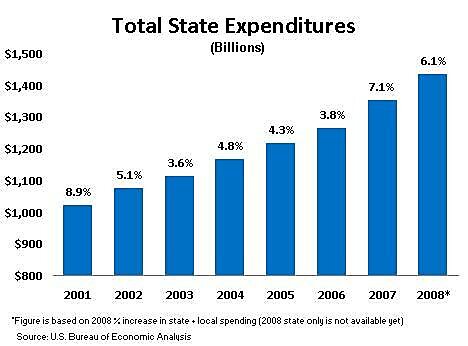 Too often journalists report on the present plight of pro‐​tax and spend policymakers without considering decisions made in the past. Readers should bear the above table in mind the next time they come across such amnesic reporting .