Earlier this week I criticized the U.S. Conference of Mayors for going to Washington and groveling for more federal handouts. Let me provide some more background for my criticisms with a look at federal budget data. The first chart shows that since 1960, total federal subsidies to state and local government have increased an astounding 1,173%. 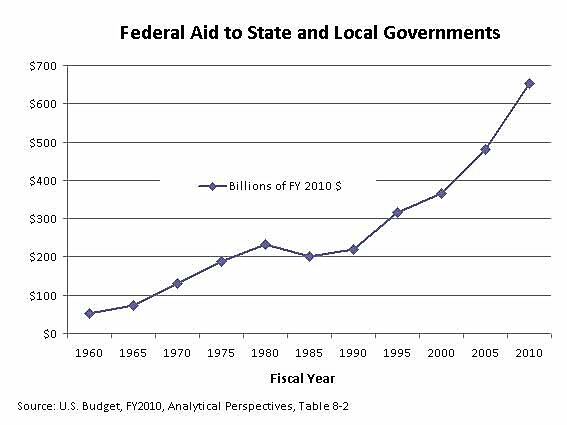 Several readers have asked me what particular programs account for this large increase in state aid. The federal budget breaks down the total figures into categories. Not surprisingly, health subsidies — mainly Medicaid — account for almost half of the current total and are the driving force behind the massive overall increase: 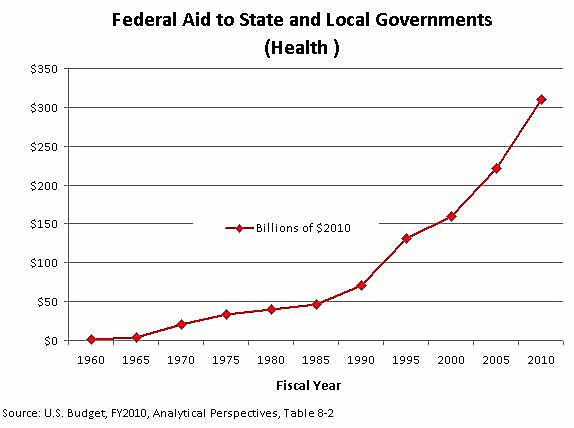 However, there have been large increases in other activities as well. Here are the changes by federal budget function in state aid since 1960, in billions of 2010 dollars:

*Administration of Justice begins in 1975. “Other” begins in 1965 and consists of grants for national defense, energy, social security, and veterans’ benefits and services.

Rather than being deprived, state and local governments have developed an unhealthy dependency on federal money. In a way, the states have become an extension of the federal government. This is at odds with the Constitution, which clearly intended for the federal government to have specific limited powers. As the 10th amendment states, “The powers not delegated to the United States by the Constitution, nor prohibited by it to the States, are reserved to the States respectively, or to the people.” There seems to be very little reserved to the states anymore, and even less to the people.

See these essays for more on constitutional basics and the desirability of fiscal federalism.