NASA takes the (frozen) cake with this one.


It just released a report on global sea ice coverage that opens with the following sentence:

Sea ice increases in Antarctica do not make up for the accelerated Arctic sea ice loss of the last decades, a new NASA study finds.

Furthermore, the global ice decrease has accelerated: in the first half of the record (1979–96), the sea ice loss was about 8,300 square miles (21,500 square kilometers) per year. This rate more than doubled for the second half of the period (1996 to 2013), when there was an average loss of 19,500 square miles (50,500 square kilometers) per year – an average yearly loss larger than the states of Vermont and New Hampshire combined.

Could have fooled us!


Figure 1 shows the sea ice coverage (anomalies) measured by satellite, as reported today by the University of Illinois at Urbana-Champaign’s website Cryosphere Today for the period since 1979 for the Arctic (left panel) and Antarctic (right panel). There has been an overall decline in Northern Hemisphere sea ice and a contemporaneous increase in Southern Hemisphere sea ice. It is also worth noting that the decline in Northern Hemisphere ice stopped about eight years ago, even as the within‐​year variability has gotten larger (perhaps because of thinning at the margins).


Put them together and what do you get? See Figure 2—the global sea ice history from 1979 through early 2015. The blow‐​up shows the last 10 years. 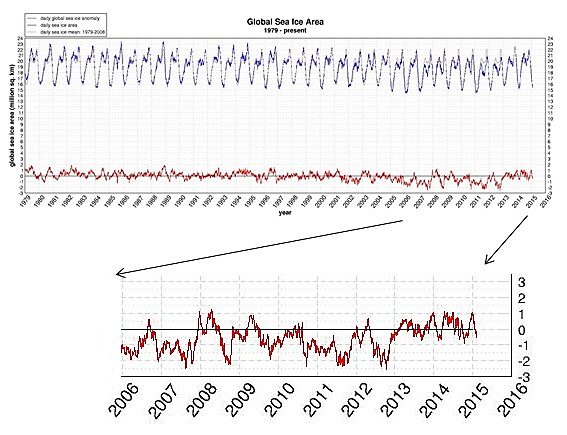 
With the data available to us (and what NASA used, too), let’s check the veracity of NASA’s claims.


Is it true that increases around Antarctica don’t compensate for Arctic decreases? Nope.


The global ice anomaly (Figure 2) for the past two years has remained very close to the 30‐​yr (1979–2008) average. This has happened because the increases around Antarctica have completely made up for the losses in the Arctic.


Is the loss of global sea‐​ice accelerating? Again, nope.


Look at the inset in Figure 2. It represents the second half of the period that NASA has offered to support its acceleration conclusion. Since 2006 (the past 9 years), global sea ice has increased.


How on earth can an extended period of increase be used as support for an accelerating decrease?!