If Spending Is Capped So It Grows at the Rate of Inflation, the Budget Is Balanced in 2018

New 10-year budget projections have been released by the Congressional Budget Office, so it’s time once again for me to show how easy it is to balance the budget with modest spending restraint (though never forget that our goal should be smaller government, not fiscal balance).

The new numbers show the path is even easier. The budget can be balanced in 5 years if spending grows at the rate of inflation (the green line) and in just 10 years if spending is limited so that it grows 3.4 percent annually (the light blue line). 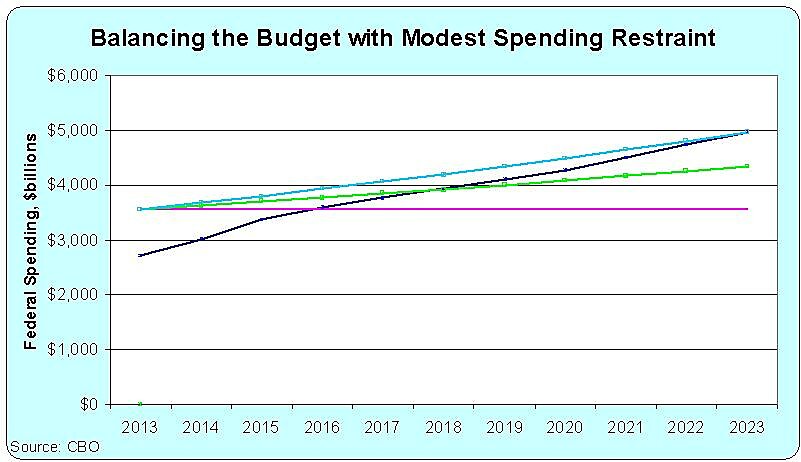 Today’s path to balance is even easier because of better 10-year growth numbers, and also because of projections that the recent tax increase will generate more revenue (the dark blue line shows total projected revenue over the decade).

Because of Laffer Curve reasons, I’m skeptical about whether all that additional revenue will materialize, so both the chart and the underlying numbers are a bit speculative.

But what they do show is that the nation’s fiscal problems easily can be addressed with some modest spending restraint. Sort of a practical application of Mitchell’s Golden Rule.

Here’s my video explaining the importance of spending restraint. The numbers are now outdated, but the concept is still completely relevant.

As noted at the beginning of the post, I’m much more concerned about reducing the burden of government spending. Balancing the budget is a secondary concern.

That’s why we should impose genuine budget cuts and not just restrain the growth of spending. That would also make it easier to adopt good tax policy.

Maybe, in a parallel universe where politicians are motivated by liberty, we can even get entitlement reform and a flat tax.