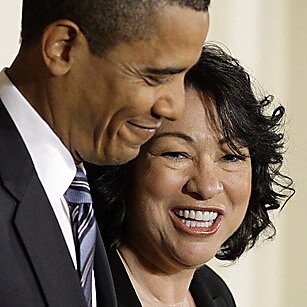 Nothing has changed in the six short weeks since Sonia Sotomayor was nominated to the Supreme Court: she remains a symbol of the racial politics she embraces. While we celebrate her story and professional achievements, we must realize that she — an average federal judge with a passel of unimpressive decisions — would not even be part of the conversation if she weren’t a Hispanic woman.


As Americans increasingly call for the abolition of affirmative action, Sotomayor supports racial preferences. As poll after poll shows that Americans demand that judges apply the law as written, the “wise Latina” denies that this is ever an objective exercise and urges judges to view cases through ethnic and gender lenses.


At next week’s hearings, Sotomayor will have to answer substantively for these and other controversial views — and for outrageous rulings on employment discrimination, property rights, and the Second Amendment. To earn confirmation, she must satisfy the American people that, despite her speeches and writings, she plans to be a judge, not a post‐​modern ethnic activist. After all, a jurisprudence of empathy is the antithesis of the rule of law.