For more than a decade now, Chinese production and processing of "rare earth" minerals -- critical inputs in many high-tech products -- has raised concerns among U.S. policymakers about the economic and national security risks arising from potential American "dependence" on China for these goods. Though the specific minerals at issue change from year-to-year, the concerns remain the same, as do domestic producers' use of the "China Threat" to seek financial and other support from the federal government. Today, the mineral is cobalt, Chinese control of which, according to a new Politico piece, is a testament to "China’s state-directed industrial policy" and an indictment of "America’s laissez-faire approach" -- "sparking a debate over whether Washington needs to intervene to encourage more mining at home" through subsidies or, as my colleague Dan Ikenson wrote in October, protectionism.

There's little doubt that Chinese companies are major global players for rare earth minerals mining and processing. With respect to cobalt, Politico explains that Chinese companies' influence stems from longstanding investments in the Democratic Republic of Congo, which the U.S. Geological Survey estimates has the world's largest cobalt mine production and reserves. But does this situation really, pace Politico (and many folks in Washington), show the efficacy of Chinese industrial policy, the weaknesses of the United States' "laissez-faire" approach, or even a major risk that necessitates federal subsidies or tariffs to encourage domestic rare earths production?

First, it's essential to understand some of the factors that created the current global cobalt market. Most importantly, the lack of domestic cobalt mining operations is due in large part to stringent state and federal regulations, not government inaction. Ikenson again:

[D]omestic production became less viable because U.S. production costs were relatively high, and the regulatory costs of U.S. mining and refining operations were increasing. Extraction and processing of rare earths requires techniques considered especially taxing on the environment and have been subject to fairly tight regulations in the United States and in most other developed countries.

These regulatory burdens are, as Dan stated, a big reason why developed countries have left a lot of cobalt production to places like the DRC, even though the aforementioned USGS survey shows that the United States and other countries have substantial cobalt resources (some of which would be produced as a byproduct of other metals).

On the other hand, this is not merely a "developed country" problem. According to one report, for example, it takes five times as long to permit a rare earths mine in the United States as it does in Canada or Australia. And the history of Australian-owned Jervois Mining's Idaho operations, which Politico notes will be the only U.S. mine to primarily produce cobalt when it opens in 2022, shows that it (1) is located on National Forest lands (and thus requires approval from not only the Environmental Protection Agency but also the U.S. Forest Service); (2) first received EPA permitting approval in 2009 but is still working its way through the state regulatory process; and (3) would require further permitting should it expand into downstream cobalt refining.

Still, the fact remains that the DRC is a major global cobalt player. So why, then, aren't more responsible U.S. and other multinational corporations in the DRC to mine cobalt and other critical minerals? Well, as I wrote a few months ago, they were... until the United States government unwisely began cracking down on certain "conflict minerals" from the DRC back in 2010:

Shortly after the [Dodd-Frank] law entered into force, reports emerged that, instead of complying with the new regulations, global corporations simply abandoned the DRC – and its poor miners and small‐​scale purchasers – entirely. This effective embargo on the region not only devastated it further, but it actually benefited “some of the very [DRC warlords] it was meant to single out,” allowed less‐​scrupulous Chinese manufacturers to move in, and undermined civil society groups working to end horrific violence and poverty in the DRC.

Some non-Chinese companies eventually came back to the DRC, but, as noted in a recent Wall Street Journal piece, Chinese miners still have substantial cost and access advantages over their foreign competitors because they're not bound by Dodd-Frank. Thus, much of China's mining advantage in the DRC is of the U.S. government's own making.

Then there are the tariffs inhibiting other cobalt imports.  In particular, the USGS notes that, while certain cobalt products (as well as imports from free trade agreement partners like Canada or Australia) may be imported into the United States duty-free, several other types of cobalt are subject to tariffs of up to 4.4% - surely not prohibitive but still making higher-cost, developed-country imports (e.g., from non-FTA partners Norway, Japan, the EU or South Korea) less competitive as compared to their cheaper, dirtier competition.

In this light, the current cobalt story becomes less about U.S. government neglect and more about its own misguided attention.

Second, it's important to consider the actual risks to U.S. manufacturers and national security if China ever did decide to cut off cobalt supplies to the rest of the world. In this regard, past Chinese efforts to restrict rare earth exports are instructive. As Ikenson notes, China began imposing such restrictions in 2010, thus threatening global supply, causing prices to spike, and leading several governments to challenge the measures at the World Trade Organization. However, as the Wall Street Journal explained in 2015 (when China finally eliminated the restrictions after losing at the WTO), markets responded to the Chinese threat almost immediately:

The [policy] shift comes after Beijing lost a dispute at the World Trade Organization in 2013. But the policy also proved to be of little value for Beijing as many countries found other sources for the materials known as rare earths, which are widely used in high-technology industries such as smartphones and missile systems.

Contemporaneous reporting backs this up: in the United States, for example, China's export restrictions led Japan's Sumitomo and others to invest heavily in a mothballed rare earths mine in California. That investment didn't work out, but it and more fruitful endeavors caused rare earth mineral prices to collapse long before China officially terminated its export restrictions in 2015: 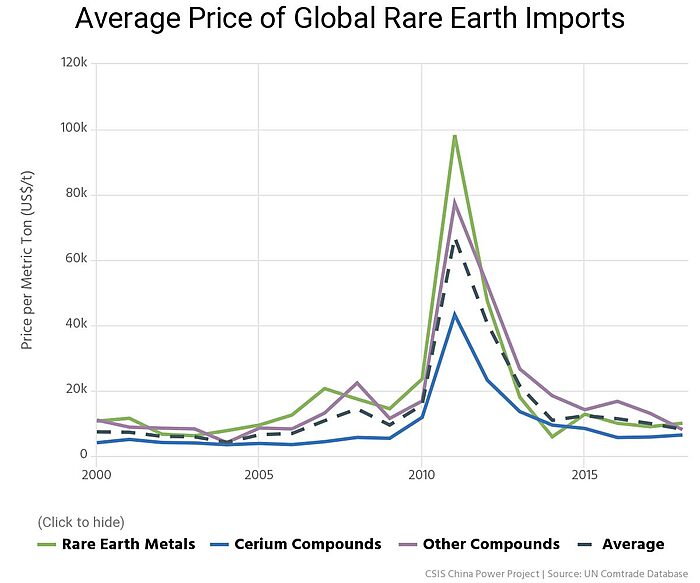 At this stage, global cobalt demand is not projected to outstrip supply until 2023, and prices today show little concern over a future supply disruption. Nevertheless, the risk alone -- due to U.S.-China tensions, continued problems in the DRC, or other factors -- is already leading to predictable market responses. In particular, private investors are pursuing non-Chinese cobalt projects (the aforementioned Jervois outfit just raised A$45 million, for example), and manufacturers like Tesla and IBM -- as well as academic researchers - are already starting to develop alternatives cobalt-based lithium-ion batteries for electric vehicles and other uses. The USGS also notes that the U.S. government has already stockpiled several hundred metric tons of cobalt in case of military emergency, and that private companies have their own substantial inventories.

Third, various government data indicate that domestic production and importation of cobalt-related goods is not as dependent on China (or the DRC) as claimed. Although certain cobalt-related supply chains (e.g. batteries) may run through China, the USGS report shows that the United States imports cobalt from varied sources and has several domestic cobalt producers (not including the aforementioned Idaho mine that will come online in 2022):

Import data from the U.S. International Trade Commission for 2019, moreover, show that neither China nor the DRC is a major cobalt supplier to the United States -- a position instead held by mainly U.S. allies:

More detailed USITC import data show that China was the largest 2019 import source for only one of the ten types of cobalt monitored by the USGS (Cobalt chlorides, HTSUS 2827.39.60).

This perspective, of course, hasn't stopped U.S. companies from running to the government for help. But instead of implementing subsidies or tariffs or "industrial policy," the federal government should reassess its own trade and regulatory policies -- especially those that discourage domestic investment or imports, or give Chinese companies a competitive advantage -- and consider the market's likely moves in response to any future Chinese malfeasance, including the moves already underway.

Otherwise, the government could end up trying to solve a problem of its own making and to mitigate a future risk that doesn't actually exist.