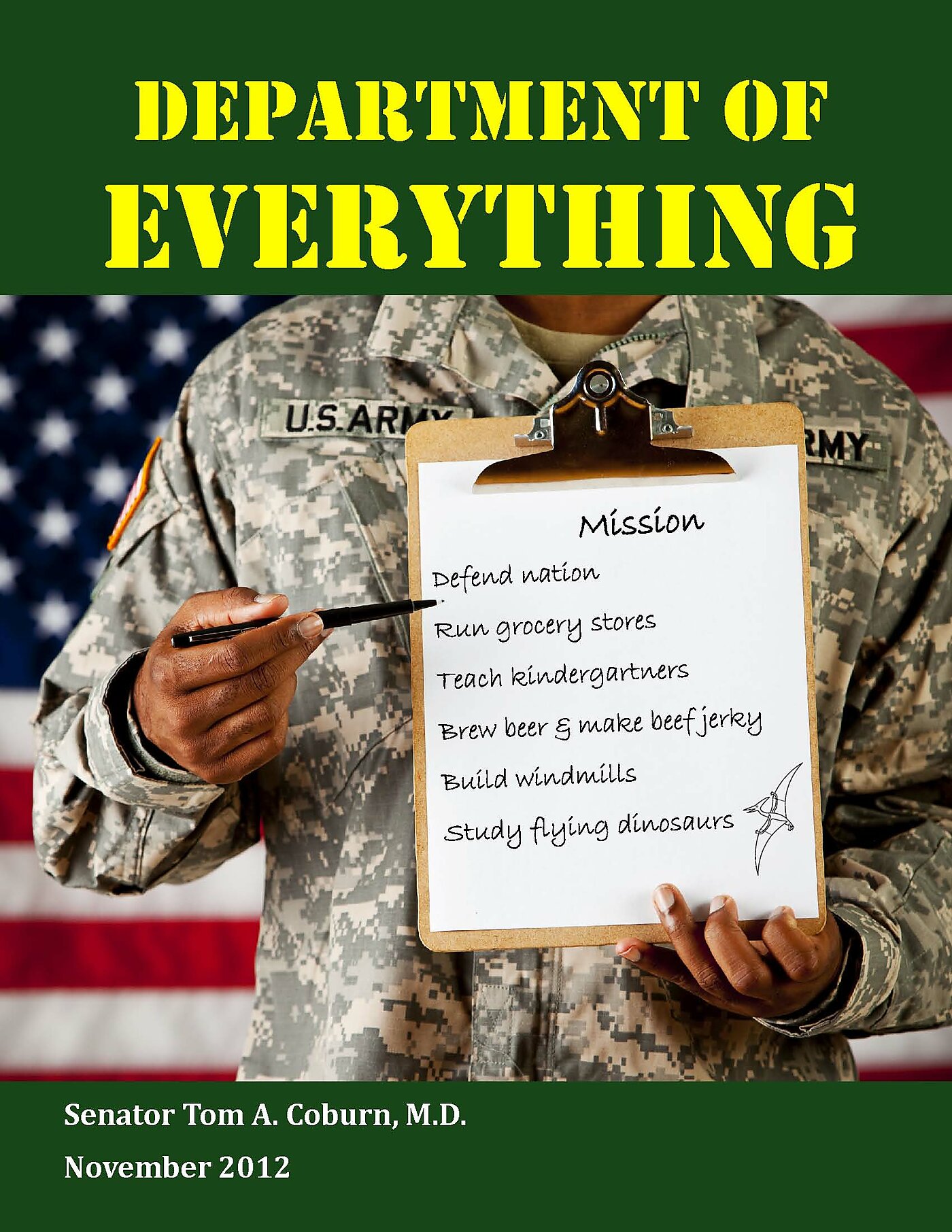 The fiscal cliff is looming and Washington is scrambling to reach a deal to avoid a Thelma and Louise ending in January. To start, policymakers need to identify spending cuts, and they could begin with Senator Tom Coburn’s (R-OK) just‐​released report on wasteful and duplicative spending in the Pentagon. The report identifies savings totaling at least $67.9 billion over the next decade in the Department of Defense. The common thread linking these disparate recommendations—from axing non‐​military research and development projects ($6 billion) to eliminating Pentagon‐​operated grocery stores ($9 billion)—is that the expenditures “have little to do with national security” and therefore could be implemented “without impacting our national security.” “Many of these programs, initiatives or research projects,” the report explains:

may serve worthy interests, but should not be the job of our military tasked with fighting and winning the nation’s wars.


The five missions examined by this report—research and development, education, alternative energy, grocery stores, and support and supply services—could be or already are being better delivered by more appropriate federal agencies or departments, civilian federal employees, or even the private sector. (Emphasis in original.)

Sen. Coburn is to be commended for his willingness to take on the self‐​proclaimed defenders of defense, those men and women who aver that the Pentagon’s $600+ billion budget is sacrosanct, and who have rushed to the ramparts with the cry of “not a penny more out of defense.”


And this is not the first time that Coburn has stepped forward with specific recommendations for spending cuts. In July 2011, his “Back in Black” plan identified $9 trillion in savings and deficit reduction, including $1 trillion from the Pentagon’s budget.

Combined with a number of other recent studies—including by Taxpayers for Common Sense, which identified $2 trillion in deficit reduction, including $672.5 billion from “national security”; and the Project on Defense Alternatives (PDA), which just yesterday put forward specific recommendations for Pentagon cuts totaling more than $550 billion—Coburn’s latest provides ammunition to those taxpayer advocates who are calling for serious spending cuts. More importantly, it should strike fear in the hearts of those faux conservatives who are urging Republicans to preemptively surrender to President Obama’s demand for higher taxes (Exhibit 1; Exhibit 2; and Exhibit 3) in order to keep the spigot open to defense contractors.


I have praised Sen. Coburn before, including here and here, but I will confess to being disappointed that this report doesn’t go far enough. According to the PDA study mentioned above, President Obama’s latest 10‐​year plan calls for Americans to spend $5.757 trillion on the Pentagon. Against that baseline, Coburn’s sensible reforms would save a mere 1 percent.


Coburn explains that he wants to “refocus the Pentagon to its true mission: fighting and winning the nation’s wars.” That is a noble goal. But none of the recommendations in this latest report address the aspects of the Pentagon’s budget that goes to fighting other nations’ wars. Coburn boasts that his plan doesn’t cut “any Army brigade combat teams, Navy combat ships, or Air Force fighter squadrons.” A truly transformational plan would.


Coming to grips with our bloated defense budget begins with a clearer understanding of what is meant by the “common defense.” To the Founders of the Republic, and to the vast majority of Americans today, it means defending us, these United States, our citizens, and our interests. The bipartisan consensus in Washington believes something very different: that American taxpayers should be on the hook for defending other countries that can and should defend themselves. Until and unless that changes, we won’t be able to make significant in military spending without overstressing the force. A smaller military should have fewer missions.


All that said, Dr. Coburn’s courage and wisdom should be emulated by others who care about this country’s security—both fiscal and physical. And those who are the first to criticize this report will reveal themselves for what they are: mindless advocates of more spending, consequences be damned.