The disability insurance component of Social Security was created in 1956 to provide income support to individuals aged 50 to 64 who were permanently disabled. As is typical with government programs, eligibility and benefits were greatly expanded over the subsequent decades.

SSDI, which is funded through a 1.8 percent payroll tax on all workers, was recently described by the Congressional Budget Office as “not financially sustainable.” The following chart shows that SSDI benefit payments have soared 119 percent since 1995 in real or inflation-adjusted terms: 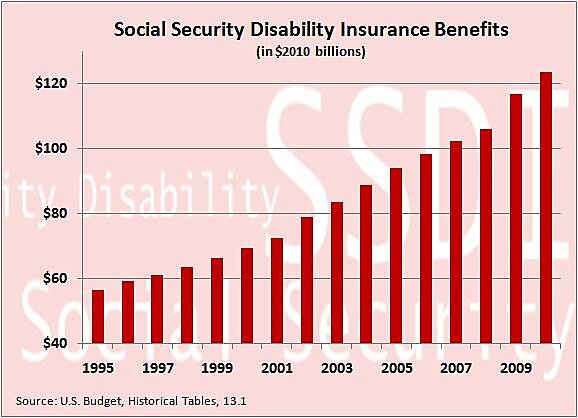 What was supposed to be a narrowly tailored program to help individuals who could no longer work has blossomed into a gigantic budgetary burden that acts more like an unemployment program. Indeed, the number of individuals receiving SSDI benefits has jumped more than 10 percent in the last two recessionary years. So a large number of people seem to be abusing the system by claiming disability in order to get government handouts. What makes the problem worse is that, unlike standard unemployment insurance, there’s no time limit for how long an individual can receive SSDI.

The long-term upward trend in real benefit payments also suggests abuse because fewer people should be having career-ending injuries.

From a 2006 paper on SSDI by economists David Autor and Mark Duggan:

Adding to the complexity of an expanding program mission, five decades of advances in medical treatments and rehabilitative technologies, combined with a secular trend away from physically exertive work, have arguably blurred any sharp divide that may have once existed between those who are “totally and permanently disabled” and those who are disabled but retain some work capacity. While one might have expected these medical and labor market changes to reduce the incidence of disabling medical conditions and hence lower the relative size of the DI program, this has not occurred.

According to the Washington Post, Autor and Duggan will release a new paper this week that proposes changes to SSDI:

Their proposal would require workers and employers to share the cost of a modest private disability insurance package, which is between $150 and $250 a year, according to the report, which is to be officially unveiled at a Dec. 3 event in Washington.

Workers seeking to go onto the federal disability program would first have to be approved for benefits from the private policy. Those benefits would go toward rehabilitation services, partial income support and other related services, the researchers said.

After receiving private payments for two years, workers would be eligible to apply for Social Security Disability Insurance (SSDI) benefits if they believe their disabilities are too severe for them to remain in the workplace, the report says.

Instead of creating a program on top of a program, why not just completely transition SSDI to the private sector? Workers should be allowed to divert the disability insurance portion of the payroll tax to a private account, the proceeds from which could then be used to purchase private disability insurance. Workers would have an incentive to spend their money prudently, while private insurers would have a financial incentive to make sure they weren’t being gamed.