Social Liberalism in the U.S. on the Rise, Fiscal Conservatism Remains Strong

Gallup’s latest report of American ideology shows the public is becoming increasingly socially liberal but not more economically liberal. Putting these trends together, you have an increasing number of Americans who are both socially liberal and fiscally conservative. This is probably why pundits are talking about a libertarian impulse trending in the United States. America is not becoming more liberal across the board, we are becoming more libertarian on social issues. In sum, the country is more libertarian today in 2015 than it was 10 years ago.

Social Liberalism on the Rise

Since the late 1990s Gallup has tracked the share of Americans who say their views on social issues are “liberal” or “very liberal.” In 1999 Americans were nearly twice as likely to say they were socially conservative as socially liberal (39 to 21 percent). However, throughout the 2000s the share of Americans who viewed themselves as liberal on social issues has steadily increased. In Gallup’s latest poll, Americans are equally likely to say they are socially liberal as socially conservative (31 percent each). 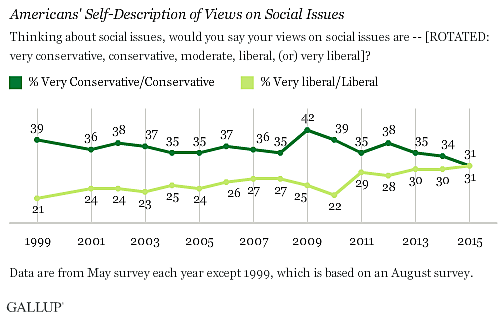 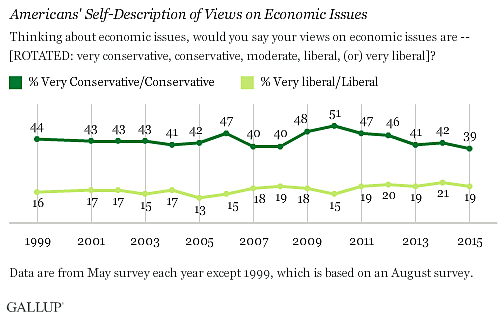 Since 1999, there has been no significant change in the share of Americans who view themselves as “liberal” on economic issues—16 percent in 1999 and 19 percent in 2015. There has been a slight decline in the share who view themselves as economically conservative from 44 percent in 1999 to 39 percent in 2015. However, there was a marked increase in self-identified fiscal conservatives between 2009 and 2012, when more than half identified as such. However, this share has since declined to 39 percent. There appears to be a reversion to the mean in American fiscal attitudes.

The American electorate is more libertarian in 2015 than it was a decade ago. Candidates seeking the presidency in 2016 will face voters more open to the rhetoric of inclusivity, legalizing same-sex marriage, and marijuana legalization, but about where they were 10 years ago on economic issues.

There has not been a clear shift to the left on all issues, but primarily on social and cultural issues. Consequently, Republican candidates may find themselves rewarded by toning down the harsh rhetoric on social matters and immigration and promoting fiscal responsibility and free markets. However, while Democrats may benefit from trending social liberalism, they should be careful to avoid staking economic positions that are perceived as too liberal.

In sum, while this is certainly not always the case, candidates leaning in a more libertarian direction will likely be benefited at the polls.